When in doubt, hail an elder 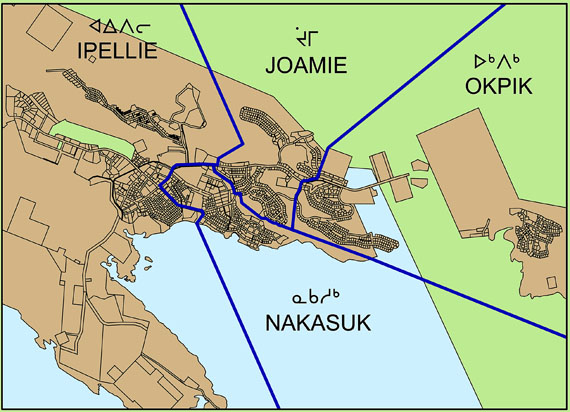 This map displays the new constituency names for Iqaluit that the 2011 Nunavut Electoral Boundaries Commission recommended in its report last month: Okpik, Nakasuk, Joamie and Ipellie. But Iqaluit City Council doesn’t like those names. Instead, they want the four constituencies to be labelled Niaqunnguuti, Sinaaa, Tasirluq and Manirajaaq. (SOURCE: REPORT OF THE 2011 NUNAVUT ELECTORAL BOUNDARIES COMMISSION)

Iqaluit City Council doesn’t like the names the Nunavut Electoral Boundaries Commission suggested, in a report issued this past June, for four new territorial electoral districts the commission proposes for Iqaluit .

Instead, city councillors asked around and came up with four names of their own, which they forwarded earlier this month to Justice Ted Richard, the commission’s chair.

The boundaries commission issued their report June 7. In it, they recommend the Nunavut legislative assembly’s 19 electoral districts be redrawn to produce 22 new constituencies.

For Iqaluit, the commission suggests the three current electoral districts — Iqaluit West, Iqaluit Centre and Iqaluit East — be rejigged into four new ones, to be called Ipellie, Nakasuk, Joamie and Okpik.

It’s not clear why they did this. In other regions, the commission recommends standard English tags for new constituencies, such as “Arviat North” and “Igloolik South.”

Their only explanation suggests that in Iqaluit, the commission got an itch to experiment and they just had to scratch it.

“Our tentative, perhaps innovative, proposal is to use the names of four renowned and respected elders from Iqaluit’s past — Ipellie, Nakasuk, Joamie and Okpik. We look forward to receiving the views of representatives of Iqaluit on this proposal,” the commission said in their report.

But the commission’s “innovative proposal” did not impress city councillors when they talked about it at a council meeting held June 28.

Mayor Madeleine Redfern, communications officer Eva Michael and city interpreter Rachel Ootoova then met with elders to ask them what they think.

In a letter to Richard July 7, Redfern said Iqaluit elders don’t like the idea of naming the constituencies “after individuals, for various reasons but mainly because some of the family names are not from Iqaluit.”

The elders, according to Redfern, said the constituencies should have “traditional Inuit place names.”

So Okpik, which would take a chunk of the current Iqaluit East district and put it together with Apex, would be called “Niaqunnguuti,” formed from the Inuktitut word used to name Apex.

Joamie, carved out of parts of Tundra Valley, the Road to Nowhere and Lake subdivisions, would be renamed “Tasirluq,” or “senseless lake.”

Nakasuk, which would mostly be made up of older parts of the current Iqaluit East and Iqaluit West districts, would be renamed as “Sinaa,” or shoreline.

And Ipellie, made up of the old Lower Base neighbourhood, the new Plateau subdivision plus the airport and North 40 areas, would be called “Manirajaaq,” or flat piece of land.

The electoral boundary commission was legally required to review the Nunavut legislative assembly’s electoral map because the populations of some communities, especially Arviat, Igloolik and Iqaluit, have grown so fast their populations are not adequately represented in the assembly.

One of the biggest outstanding problems was Akulliq, a two-region constituency made up of Repulse Bay and Kugaaruk.

MLAs elected to represent Akulliq must usually spend two or three travel days to get from one community to another within the riding.

The commission’s recommendations must be passed into law by the legislative assembly before the proposed new electoral map may be used in the next territorial election.

Redfern’s July 7 letter to Richard was distributed to Iqaluit city councillors at a council meeting July 26 as a information item.