Iqaluit RCMP: police service calls on the rise this year 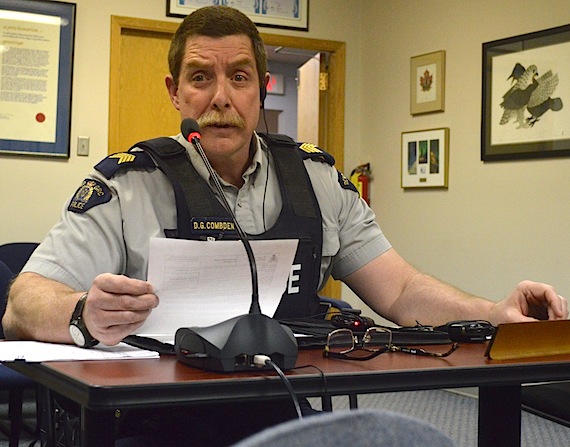 “We deal with a fairly large proportion of violent crime here. It takes a lot of our time… in a period of 90 days we’re looking at [about] 130 serious files coming in,” Sgt. Dave Combden tells Iqaluit councillors at their June 26 city council meeting. (PHOTO BY STEVE DUCHARME)

Iqaluit RCMP officers responded to 3,084 calls for service over the first quarter of their fiscal year, according to a briefing given to Iqaluit city councillors at their July 26 council meeting.

“We deal with a fairly large proportion of violent crime here. It takes a lot of our time… in a period of 90 days we’re looking at [about] 130 serious files coming in,” Combden told councillors.

RCMP officers investigated 97 common assaults, 36 assaults with a weapon, two aggravated assaults and one attempted murder, according to figures presented to city council.

But Combden said the reality of enforcing the law limits officers from engaging with residents beyond the scope of regular duty, but he said he would take Stevenson’s suggestion into consideration.

“Quite often we’re backed up call to call to call. The ability for our members to actually get out on foot is limited due to the call volume,” he told Stevenson.

“The practicality isn’t really there.”

Drug offences recorded by the detachment dropped substantially from 38 offences in the first quarter of 2015 to 18 this year.

But Combden explained to councilllors that the detachment disbanded its street crime unit last year due to “resourcing issues.”

“We are starting a general investigation unit in the fall, that can contribute to that drop,” he said.

The most significant increase included in the RCMP numbers show that Iqaluit officers responded to 437 events classified under “territorial acts,” an increase of 143 over the same quarter last year.

“Territorial acts” includes enforcement of Nunavut legislation, such as the Mental Health Act and the Vehicle Act.

Combden said 126 calls under that territorial heading related to the Mental Health Act, pointing to the dire need for mental health services in the territory.

“That’s pretty significant, that’s almost one and a quarter per day. That’s daunting, that’s a challenge that we have to face and community has to face. We get a lot of calls,” he said.

Combden told council the detachment is expecting additional resources in 2017 that “might be able to help us.”

Some other figures of note from the RCMP’s report:

• “other Criminal Code” violations increased from 518 to 599 in the first quarter of 2016. Combden explained “a lot of it deals with people released on conditions [from court] and we have to arrest them;”

• impaired driving in Iqaluit increased by two incidents to 39, up from 37 reported over the same period in 2015.