“To make an informed decision, shouldn’t we know the municipality’s stance first?” 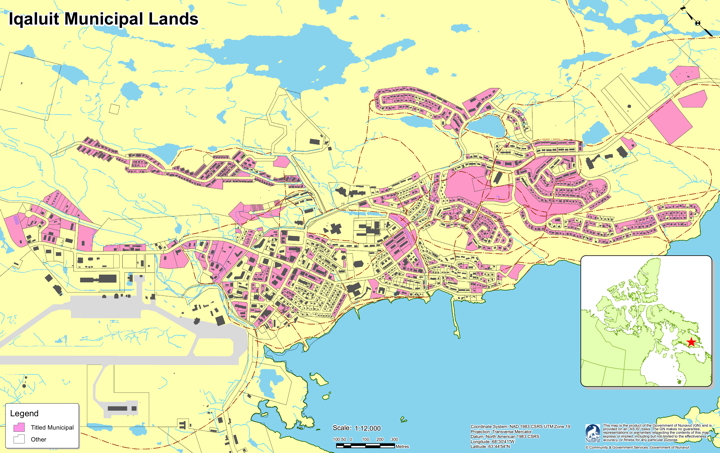 A Government of Nunavut map showing what lots are owned by the City of Iqaluit, and therefore subject to be sold under a “yes” vote. Nunavummiut will vote May 9 on whether they want their municipality to have the power to sell land which, under the Nunavut Land Claims Agreement, is currently only available for long-term lease in the territory.

For some Iqaluit residents, there were more questions than answers March 23 at a public information session held by the Government of Nunavut on the upcoming land referendum.

About 30 people attended the meeting, held at Iqaluit’s Frobisher Inn.

The vote, scheduled for May 9 in all Nunavut communities, will determine whether municipalities have the option of selling their land or continuing under the current leasing options outlined in the Nunavut Land Claims Agreement.

Voters May 9 will have one question to answer: “Do you want the Municipality of ______ to be able to sell municipal lands? Yes or No.”

Nunavut’s Department of Community and Government Services, which is organizing the plebiscite, put on a 15-minute presentation March 23 in Iqaluit before taking questions from the public.

The presentation provided information on what the results of a majority “Yes” vote would mean, including:

• municipalities would not have to sell land, but would only have the option of selling land;

• changes would not take place overnight, but within a “reasonable” time to allow councils to amend bylaws;

• local councils would not have to sell all of their land, but can choose which of their lots to sell;

• residents with equity leases would be able to buy their land or, if the lease has been paid in full, transfer to fee simple title;

• a “Yes” vote would not be reversible because the NLCA only explains how to remove the restriction of selling municipal land, not how to impose a restriction;

• local councils would be able to place residency restrictions on land ownership, but territorial legislation would have to be amended to give councils that ability; and,

• residents transferring from a lease to ownership would incur some costs, including registration fees at the local land titles office, legal fees and administrative fees.

One resident at the March 23 meeting, Apex homeowner Anne Crawford, wondered why residents should have to incur any costs in transferring from a lease to ownership.

Crawford also expressed concern that lots designated as municipal lands may not have been surveyed properly.

“In the Lower Base area, some surveyed lines go right through houses,” Crawford said.

Darren Flynn, an assistant deputy minister with CGS, admitted that some surveying may need to be redone.

And an employee with the territorial Land Titles Office, who did not provide his name, explained the fee schedule for transferring lands.

Crawford asked if, as in the Northwest Territories, transfer fees would include the value of buildings or homes on the lot.

But the employee couldn’t answer that question.

A local business owner asked for the City of Iqaluit’s position on the plebiscite.

“To make an informed decision, shouldn’t we know the municipality’s stance first? Otherwise, why are we voting for something that might not happen?” she asked.

Flynn said the City of Iqaluit, like the GN, has chosen to remain neutral in this vote.

“I would think, at the risk of assuming, municipalities would listen to their voters,” Flynn said.

Under the NLCA, the last referendum on this topic took place in 1995, when all communities in Nunavut voted against giving municipalities the right to sell land.

Voters in Iqaluit, which had the lowest voter turnout in that vote of any Baffin-region community, showed stronger support than any other Nunavut community for allowing municipalities to sell land.

About 45 per cent of Iqalungmiut voted in favour of land sales in 1995, according to data handed out by CGS at the Iqaluit meeting.

Eligibility for the vote is the same as in municipal elections, Flynn said: voters must be at least 18 years old, Nunavut residents for one year and residents of their community.

Flynn said advanced voting will be held from April 25 to May 5 at a location yet to be determined, while mobile polling will be available May 2 from 9 a.m. to 11:30 a.m.

For more information on the referendum, you can visit a website set up by CGS by clicking here, by emailing the GN at landreferendum@gov.nu.ca, or by finding the referendum’s Facebook page.

Officials from CGS will hold public information sessions in two more communities before the referendum: in Whale Cove on March 31 and in Sanikiluaq on March 29.