Uquutaq Society’s board back at full strength, city promises help 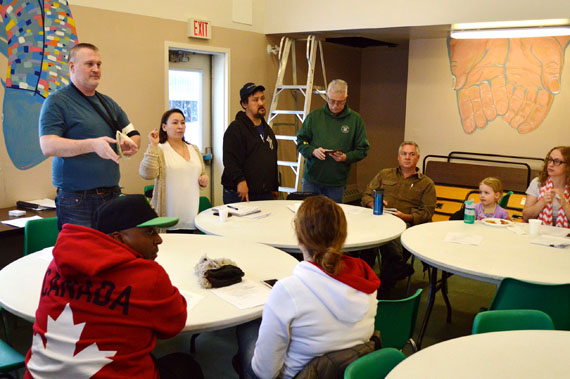 The Uquutaq Society, the group that looks after Iqaluit’s struggling men’s shelter, drew a strong turnout to its annual general meeting on Saturday, Jan. 28 and its eight-member board is now back at full strength. (PHOTO BY STEVE DUCHARME)

The message is loud and clear: Iqalungmiut want to help the homeless any way they can after showing their support in record numbers during the Jan. 28 annual general meeting for Iqaluit’s men’s shelter.

The Uquutaq Society—a volunteer organization that has overseen operations at the shelter—has fought an uphill battle against capacity and funding shortfalls since its inception in 2009.

In recent years, the facility has struggled to care for the volume of men in Iqaluit that require its services.

But a pair of tragedies late last year, when two men from the shelter went missing, shook many out of their apathy and the society’s weekend meeting at Iqaluit’s soup kitchen drew many participants.

“The most we’ve ever had is 12 or 15 people, so I really appreciate that you all came today.”

Brewster, however, said later that no representatives of Inuit organizations attended or appeared to be engaged in the issue.

We have not had luck reaching out to @ITK_CanadaInuit @NTunngavik @Qikiqtani_Inuit @InuitYouth KIAs, regarding the homeless #inuit men in IQ

The increased attendance and exposure for the society could not have come at a more critical moment in the organization’s history.

Last year, the shelter logged more than 7,758 daily clients, or 106 per cent of the shelter’s yearly operational capacity, according to the society’s 2015-16 annual report.

The report added that, on average, up to 20 men use the shelter on any given day, but Uquutaq’s executive manager, Doug Cox, says the real number “is much higher than that.”

“Its closer to 30, with a record of 39,” he told the Uquutaq board during his report, saying that about 101 people used the shelter last year, with an average age of 39 years.

But the society’s money has dried up as its services are becoming more in demand.

According to its financial statements, Uquutaq received about $30,000 less in 2016 from the Government of Nunavut than in 2015.

That’s almost equal to the society’s reported deficit this year of $24,854.

And membership on the society’s board has disappeared almost as quickly as the money.

Only two of eight board members from 2016 remained on the board prior to the weekend AGM, Brewster said.

Board members can be unprepared for the demands of the position, Brewster said, with many burning out shortly after they join.

It creates a domino effect for the society, she said. Without enough participating members, the board struggles to lobby for additional funding and advocate for its cause at Nunavut’s various levels of government.

That problem, at least, is solved for the time being. Eight Iqalungmiut stepped up to assume board positions during the AGM’s call for nominations.

Iqaluit Mayor Madeleine Redfern, who attended the meeting, told attendees that the City of Iqaluit has already begun preliminary meetings with Cox to determine what it can do to help the society.

On Jan. 10, Iqaluit’s city council committed to do more to help the city’s homeless population after Coun. Joanasie Akumalik added the topic to council’s agenda following the death of shelter resident Jake Angurasuk.

But even among attendees at the soup kitchen, solutions for what faces the society are broad and varied and generally fall into two categories: what can the society do to fulfill its current mandate and what can be done to expand the services it already provides.

“Honestly, I just think we need a bigger building to handle what we have,” Cox explained to one attendee.

“You’ve seen how tight it is, with people on the floor, all the couches are full, all the chairs are full.”

As for expanding services at the shelter, Cox seemed to suggest the responsibility should fall to many organizations and service providers, and not just the shelter.

“Everybody seems to turn to the interest to be open all day long, its definitely not the answer to be open 24 hours a day,” Cox said.

“We want to open the shelter for more public services, like mental health nurses stopping by, somebody from housing stopping by and making sure all their applications are filled out,” he said.

“The last thing we want to do is spent our hard earned money that we chase for on something somebody is already doing.”

Cox, who acted as a voting member on Uquutaq’s board, had his position amended to a non-voting “ex officio” within the society, following a successful amendment the board’s bylaws.