Poisons leeching from North 40 could get worse with climate change 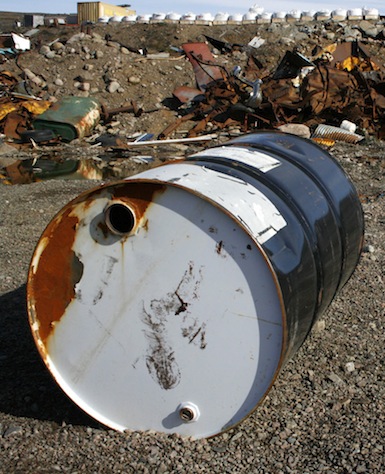 This old barrel is typical of the junk you can find at the abandoned metal dump in Iqaluit’s North 40 area. The dump has been contaminating the Airport Creek for decades. (PHOTO BY DAVID MURPHY)

By the scrap metal dump at the end of Federal Road in Iqaluit, you can see two different shades of green in the stream of water known as Airport Creek — there’s a natural green from algae and a glistening green chemical trying to separate itself from the water.

You’ll also find banged-up gasoline drums, the rusted front ends of ancient vehicles, and metal siding, some of which may date back to the 1940s.

This dismal view drew researcher Chris Luszczek, a graduate student at York University, to study the area six years ago with the help of the Nunavut Research Institute.

So far, he said he’s been able to detect big changes in the various forms of life that use the creek.

“Changes included sharp decline in the number of insect species that are in the stream location,” he said.

His project is aimed at tracking these changes year-by-year, to measure the impact of Iqaluit’s growth on the surrounding ecology.

Luszczek’s guess is that the metal dump isn’t lined correctly and that the dump is not “protected the way it should be.”

Leeching will take place at a faster rate if the metal dump isn’t properly contained or cleaned up soon, he said.

That’s because when permafrost becomes more unstable due to climate warming, a deeper thaw occurs during the summer and more contaminants will leech from metal dumps.

“I think that is something to be concerned about in an environmental prospective,” Luszczek said.

It’s something the City of Iqaluit is aware of and wants to clean up, city planner Arif Sayani said.

But an old unresolved dispute involving the Government of Nunavut and the Government of Canada — neither of whom wants to take ownership or responsibility for the site — plus a lack of money, has prevented a clean-up so far.

But Sayani says getting the clean-up done should come before the ownership issue is resolved.

“I think the key first step that the city is interested in is — let’s set aside the ownership question and, you know, let’s find out how much it’s going to cost and see if everyone can work together,” he said, adding this study could be a catalyst in getting a cleanup started.

The GN has not yet responded to a request by Nunatsiaq News for more information..

Luszczek is, moreover, worried that this metal leeching could be happening elsewhere in Nunavut.

“I have heard problems with other community dumps, most recently in Resolute Bay,” he said.

That’s why he hopes to create a territory-wide, community-based monitoring project to detect this kind of pollution.

“We hope that we can develop a tool for volunteers for collecting samples, but also developing data and drawing conclusions form that data,” he said.

Eventually Luszczek hopes this kind of data collection and research could lead to policy change that would stop polluters and encourage environmental clean-ups.

“What we try to do is inform policy makers. I hope it will help in the creation of informed policy making. It’s certainly one of our goals.”