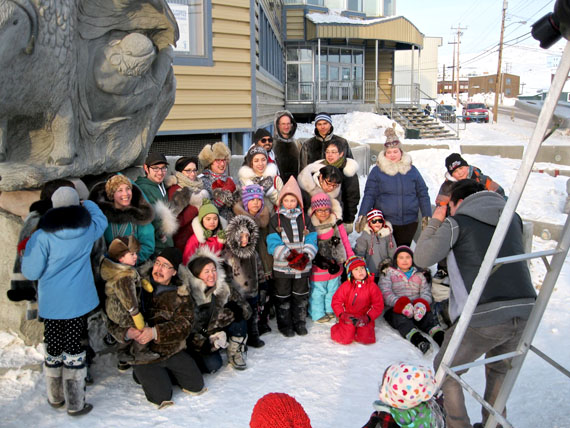 More than 30 Iqaluit residents demonstrated support for the seal hunt and seal products by posing for a “sealfie” in front of the Nunavut Tunngavik Inc. monument in Iqaluit, March 27. This was their answer to celebrity talk show host Ellen Degeneres’s “selfie,” which featured 12 movie stars and earned $1.5 million for the U.S. Humane Society, a major opponent of the seal industry. (PHOTO BY PETER VARGA)

A group of Iqaluit residents answered a call to turn out in their best sealskin outfits and pose for a “sealfie” in the city centre March 27 as a show of solidarity for the seal hunt and seal products.

The gathering was a response to a popular “selfie” photo, shot and posted by U.S. talk show celebrity Ellen Degeneres during the Academy Awards, which she hosted.

Degeneres’ self-shot photo featured no fewer than 12 movie stars. Samsung, the manufacturer of the smartphone used to take the picture, promised to donate a dollar to a charity of Degeneres’ choice every time an online Twitter user re-tweeted the photo.

The shot quickly became the most tweeted photo of all time, and the host donated $1.5 million of her earnings to the United States Humane Society, a major opponent of the seal industry.

The daytime talk show host advocates an outright ban on seal hunting. Her TV show’s website calls the hunt “one of the most atrocious and inhumane acts against animals allowed by any government.”

Iqaluit’s answer to the selfie was the sealfie — an online show of support for seal hunting.

More than 30 Iqaluit residents showed up for photos at 5:30 p.m. in front of the Nunavut Tunngavik Inc. monument, which commemorates the signing of the Nunavut Land Claim Agreement that led to the creation of the territory.

Iqaluit filmmaker Alethea Arnaquq-Baril spearheaded the event that afternoon via Facebook. Her friends Laakkuluk Williamson Bathory and Nancy Mike first came up with the idea.

“Then, over lunch today Alethea and I were talking and I said, let’s do it, let’s organize a selfie,” Mike said. “Let’s get a photo of everyone in their sealskin outfits, just to support the use of seals.”

Mike and Williamson Bathory showed up at the sealfie shoot with their children, as did most other supporters. Many kids and parents were clad in some common form of sealskin clothing — mitts, boots, coats, and vests.

Anyone with a camera handy took pictures of the group, and of each other, to post online.

“I’m hoping that everyone who took photos will post their own sealfies,” Arnaquq-Baril said at the scene. “Of course I’ll be putting it up on my site, and on my Facebook and Twitter as well.”

Everyone who snapped photos followed suit, marking their shots with the hash tag #sealfie on Twitter and other social media.

The Iqaluit-based filmmaker, who is now working on a documentary about the seal hunt, said she hoped Degeneres would make “a little bit of effort to understand where we’re coming from.”

If she did, “she’d realize that Inuit are the ultimate animal rights activists and environmentalists. And we need to find some common ground.”

Arnaquq-Baril said she and many supporters of sealing are actually “big fans” of the talk show host.

“But I would be surprised if she knew anything about our land and culture,” she said. “If she did, she wouldn’t be donating $1.5 million to an organization that’s worked very hard to crush our culture, and our economy. She probably hasn’t been exposed to too much media on the subject, and that’s what we’re trying to do is raise some awareness in the media, from an Inuit point of view.”

“I care about my society, the place I live in,” Arnaquq-Baril said.

“I want us to have a healthy way of life, and I want our young men to have a job to turn to that isn’t necessarily a destructive resource-extraction industry.”

The Degeneres selfie also compelled a young Iqaluit resident, Killaq Enuaraq Strauss, to post a video response to the celebrity, March 23, in which she describes the importance of the seal hunt to Inuit of Nunavut.