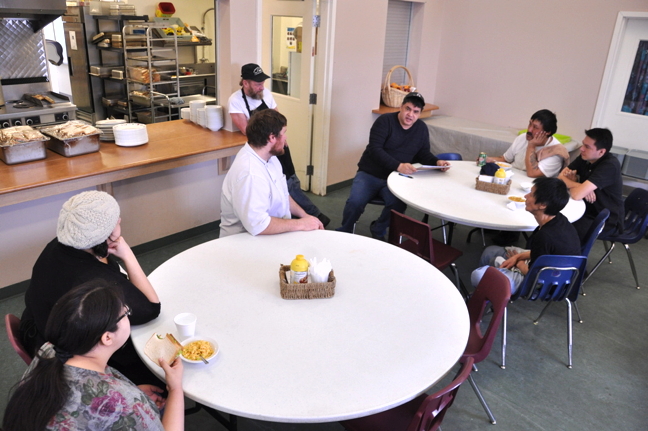 Iqaluit soup kitchen chef Michael Lockley, seated with black sweater and jeans, has lunch with his kitchen team Feb. 27 before they open their doors to the lunchtime crowd. (PHOTOS BY THOMAS ROHNER) 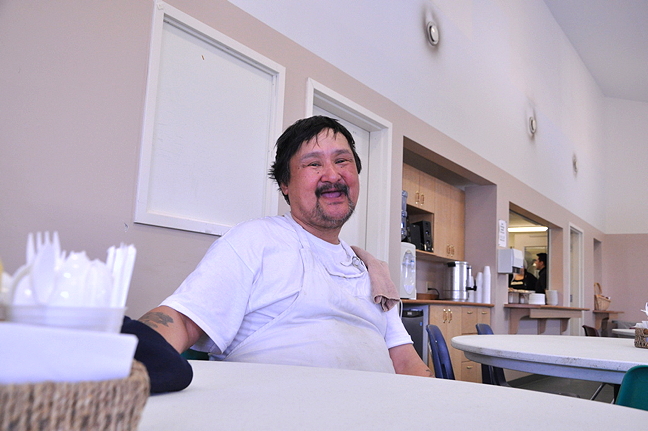 Don Kunuk, who works at the Iqaluit soup kitchen, spent 20 years working for the City of Iqaluit but says his dream is to “teach people to cook.” 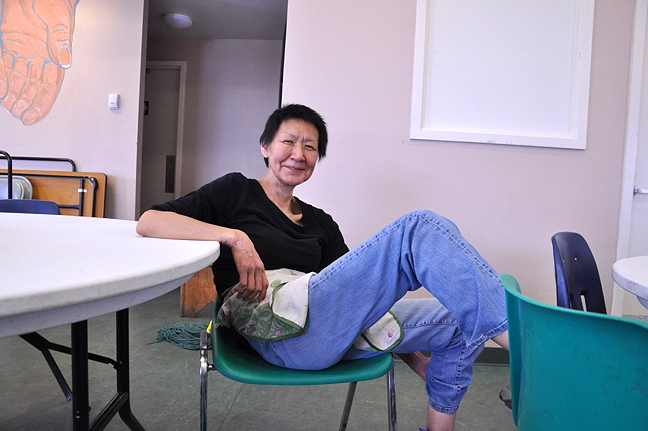 Pitseola Ineak, who works at the Iqaluit soup kitchen, is now also a job coach for new hires.

Pitseola Ineak likes her job at the Iqaluit soup kitchen, in part because it reminds her of her father and his generosity.

“Before there was anything like this [soup kitchen], my father would feed people. He’d go out on the land and get seals or whatever was available. And then come back and call out for everyone to come,” Ineak told Nunatsiaq News from the Iqaluit Food Centre Feb. 27.

“I always make little snacks available for the little kids. Sometimes I buy my own little snacks to give them and say it’s for when they’re in school. Especially kids—I don’t want them going hungry.”

Ineak began her time at the soup kitchen as a client of the Nunavummi Disabilities Makinnasuaqtiit Society, which hired a job coach to show Ineak the ins and outs of working in a kitchen.

But Ineak, who grew up partly in Iqaluit and partly in Montreal, learned so quickly that she became a job coach herself.

Ineak likely could have had her pick of a number of jobs in Iqaluit—she said she has worked as a medical interpreter in both Montreal and in Iqaluit.

But feeding needy people is, in part, what keeps her happy working at the soup kitchen.

“It’s very, very important because for most people, this is their only meal that day. And if we make sandwiches they take extra home, so that will be their supper.”

In fact Iqaluit’s soup kitchen has become important to so many Iqalungmiut that it is almost become a victim of its own success, chef Michael Lockley said Feb. 27.

Over the past six months, the number of daily portions and dinners the soup kitchen serves has easily doubled to 250 portions and their client base tops 100 people, he said.

That’s due, in part, to a unique partnership between the soup kitchen, the disabilities society and the society’s Inclusion Café catering arm.

Lockley started off as a job coach in the fall of 2016, shortly after the disabilities society teamed up with the Qayuqtuvik Society—which runs the soup kitchen—to provide weekday lunches and weekend dinners.

Before that, the Qayuqtuvik Society provided the meals itself and sometimes loaned its space to the disability society’s successful catering business, the Inclusion Cafe.

“We have so many people coming that we sometimes don’t have enough space, so we need to figure out how to handle that—either have a bigger space or a second seating. I’m not sure.”

Regardless, they’re committed to making it work because the soup kitchen, as a central gathering place, is about more than just food.

“Some people need other sorts of comfort too. They’ve got black eyes or other injuries. You can tell things are hard for them,” said Lockley, the kitchen coordinator for both the soup kitchen and the Inclusion Cafe.

“Someone told me last week, ‘how can you expect someone who is hungry to worry about other issues?’”

But the soup kitchen does more than just feed Iqaluit’s hungry.

“We’re training people with disabilities, giving them a chance to earn some money and gain experience in a professional kitchen, but also how to work as part of a team, how to show up on time and carry out tasks,” Lockley said.

He added that some of the people he coaches are better employees than colleagues he’s worked with at other Iqaluit businesses.

Like Ineak, whose kitchen skills are first-rate and whose Inuktitut skills come in handy to help keep her coworkers on task, the chef said.

Another worker at the soup kitchen, Don Kunuk, told Nunatsiaq News he used his language skills to translate for Justin Trudeau, during the prime minster’s recent visit to Iqaluit.

But Kunuk, who spent more than 20 years working for the City of Iqaluit, has his eyes set on a culinary career: “My dream is I want to teach people to cook. That’s what I want to do.”

While Kunuk was in Igloolik recently to visit his grandmother and aunt, he said there was a lot of interest in the Inclusion Cafe.

“I told them I want to go back and teach them,” said Kunuk, who sits on the board of both societies.

Like Kunuk, Amanda Arnarjuaq, another worker at the soup kitchen, likes to cook.

But her favourite part about the job is baking chocolate chip cookies or muffins, she said Feb. 27.

“Sometimes I do dishes when I have to,” said Arnarjuaq, 27, about her first job.

Having a job is important she said because it helps put food on the table at home, where she lives with her mom and younger brother.

“I wasn’t interested in a job until I was 26. My mind was hard on me. But then I got help. I feel better having a job but it’s tiring. Sometimes when I’m exhausted I go home and I go to lie down on my bed and I didn’t notice I fell asleep.”