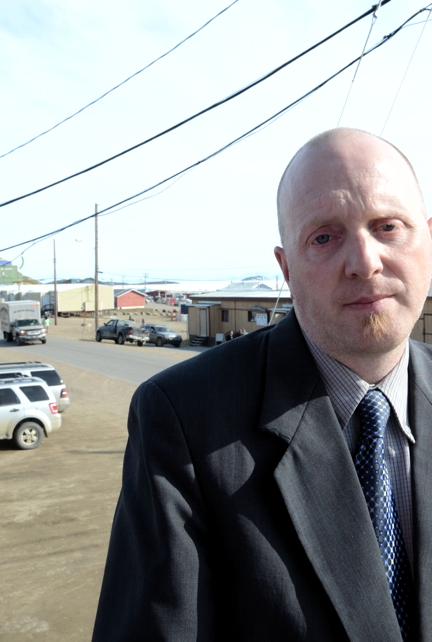 Frank Reardon said his mother, a stamp collector, is thrilled his sundog image will be a Canada Post stamp. (PHOTO BY DAVID MURPHY) 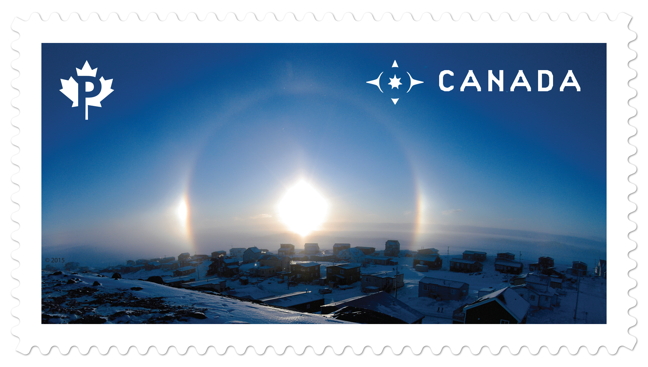 Frank Reardon of Iqaluit snapped this shot of a sundog back in December 2012 and Canada Post liked it so much, they put it on a stamp. (PHOTO COURTESY CANADA POST)

When Frank Reardon glanced through his car window on his way home from work Dec. 3, 2012, he knew he had to get home — and fast.

“As I was driving home I was seeing it and I was like — wow. It’s full rings,” Reardon said.

Those wows were all about a sundog.

A sundog is what happens when sunlight hits ice crystals in the Earth’s atmosphere, and scatters the light.

It creates the illusion of two different, smaller suns beside the sun — with rings around them. It’s a rare meteorological phenomenon, especially when the ring is full.

Reardon had seen sundogs before — he even tried to photograph them.

But this time was perfect.

He raced home, ran into the house and returned outside with his camera.

“With sundogs, sometimes they come and go. By the time you get there, it’s already gone. Or the lighting isn’t correct, and you just kind of get tiny rings, with circles on the end,” he said.

“This time I was lucky to get a full shot.”

The outcome is what you can see on a new Canada Post postage stamp: Canada Post selected Reardon’s shot after he posted the photo on The Weather Network’s website.

Canada Post, along with The Weather Network, teamed up for the 175th anniversary of “continuous weather observing in Canada.” Five new stamps have been released which showcase Canada’s unusual — and often bizarre — weather.

“From coast-to-coast-to-coast Canada is known for its diversity, and weather is no exception,” said the minister responsible for Canada Post, Lisa Raitt, in a June 12 news release.

“The images captured in weather wonders illustrate the natural beauty that can be seen across our country,” Raitt said.

Reardon’s over the moon about being on a stamp — but his mother, a big stamp collector, was “tickled pink.”

“She was very, very proud. And she’s always telling everybody about it. And she can’t wait to get a copy of the stamp, and I’m currently waiting for it too,” Reardon said.

Reardon’s mission as a photographer is to expose southerners to the beauty of the North, he said.

“I love the northern photography. It’s my dream to show people in the south everything that you can see while you’re up here,” Reardon said.

And Reardon’s day job offers plenty of opportunities for a northern shooter — he works in information technology for the Nunavut Court of Justice. That means he travels around Nunavut regularly with the circuit court.

It’s easier to list where Reardon hasn’t been in Nunavut: Sanikiluaq, Coral Harbour, and Gjoa Haven. He’s been everywhere else.

“Lots of things that I try to photograph in communities is normal, everyday scenes so people can see what the communities are like in any unique perspectives in them,” Reardon said.

“Also the Inuit husky,” Reardon adds, “If their eyes could tell stories… imagine.”

Reardon’s story isn’t so bad itself.

He was born with congenital cataracts in one eye.

“Just last year it got to the point where I’ve been suffering the past 13 years with severe glaucoma pains, and I’ve always had a lot of pain,” Reardon said.

“Last year they finally had to take it out. Now I’ve been pain free since I’ve had it removed. So it’s been great,” he said.

After his eye removal surgery, his photography work slowed down a little. But he’s back at it now, and judging from his Flickr account, the quality, and quantity, of his work hasn’t changed.

“But when I’m out in the severe cold I always have to patch my eye up with something because it does freeze and causes a lot of discomfort.”

A combination of a heated snowmobile helmet and a flow of constant eye drops helps, too.

It’s a good thing Reardon has continued to feed his passion. The sundog stamp has gotten a lot of attention and his Flickr account has been flooded with viewers — some people even wanting to buy his work.

Reardon’s not quitting his day job, however. But it is nice to dream about selling pictures and earning a reputation as a northern pro.

And he can do that, he says, thanks to the support of his wife and children.

“Sometimes it’s not so easy. I might be taking a picture, but lots of times they’re standing behind me, waiting for me to finish up,” he said.

“Without them and their support, I probably wouldn’t be where I am today.”