Buckle up or pay a fine, bylaw officers warns 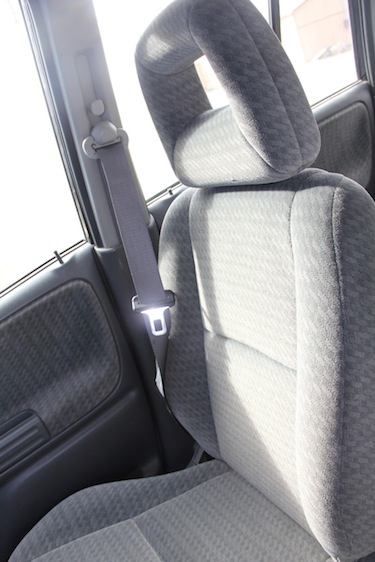 If you’re a driver in Iqaluit, you should start buckling up or face being fined in the future. (PHOTO BY SAMANTHA DAWSON)

Buckle up: the City of Iqaluit plans to start targeting drivers and passengers who don’t wear their seat-belts, Kevin Sloboda, the chief municipal enforcement officer, said June 26 at a city council meeting.

The bylaw office will start a campaign that will specify the penalties as they start giving out warnings.

“There’s no reason why it shouldn’t be being enforced,” Sloboda said, although he acknowledged that in Iqaluit no one has ever been ticketed for not wearing a seat-belt.

But, bylaw officers plan to hand out flyers, stating what offences you can be charged with, and then after a certain date, tickets will be issued.

The enforcement of seat-belt use comes after “serious accidents in town where people haven’t been wearing their seat belts.”

If a person is driving 40 kilometres an hour, the minute you hit something, the force of impact doubles, Sloboda said.

“That body part is travelling at 80 kilometres an hour,” said Sloboda, adding that kind of impact can cause internal injuries as well.

For the most part, seat-belts do what they are intended to do, Sloboda said.

The city’s awareness campaign will serve as a transition period, during which people will learn why the use of seat-belts is important, he said.

People are also talking on their cellphones and texting while driving too, he said.

“They’re on the phone just as anywhere else, and they are texting and they’re getting good at it.”

Talking on the phone and texting are practices that are also against the law — and enforced — in most jurisdictions in Canada.

Councilor Mary Ekho Wilman told the council she’s noticed women driving with babies on their backs in an amauti, and who are not wearing seat belts.

The approach Sloboda wants to take is a good one, said Wilman, who supports educating people about the penalties of not buckling up and getting people into the habit of wearing seat belts before starting to issue tickets.

“I think sometimes people just need to be reminded,” said Wilman, noting that the city is well known for not enforcing seat belt use.