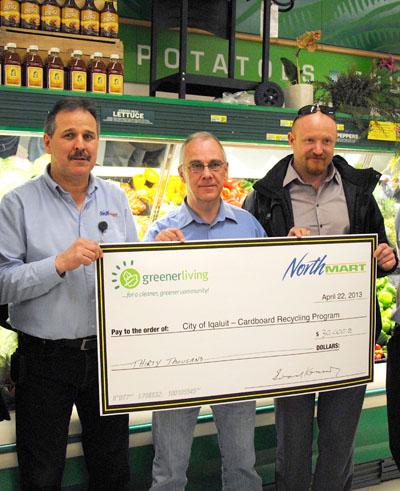 Northmart store manager Cliff Stringer, left, presented a $30,000 cheque to the City of Iqaluit in April, for environmental purposes. The unused funds resurfaced at a June 25 council meeting when Coun. Terry Dobbin reminded councillors about it. Mayor John Graham, centre, and Coun. Romeyn Stevenson collected the cheque with Dobbin at a brief ceremony held at Iqaluit’s Northmart store. (PHOTO COURTESY CITY OF IQALUIT)

Even though summer is well underway, Iqaluit City Council members agree that too much trash remains strewn around streets, public spaces, commercial and industrial areas in the city.

Council grappled with the perennial issue again at its regular meeting June 25, and found an answer to areas that lie within its control — streets and public spaces — thanks to a $30,000 gift it received in April from the Northmart store and forgot about until now.

After talking about how to deal with refuse around rented housing and on commercial and industrial lots, which are the responsibility of companies and private owners, council refocused its attention on public spaces.

Deputy mayor Mary Wilman, who chaired the meeting, said garbage clean-up must cover the entire city, and asked how the Iqaluit Housing Authority and businesses can be brought into the effort.

“It’s an eyesore to our community,” she said.

“We should think of it as our civic duty. We as the city should be in the forefront of clean-up efforts.”

“I wholeheartedly agree with you,” said Coun. Kenny Bell. “But we have to care for our own properties, and currently, a lot of our properties are in disarray.

“I would suggest that we start by directing our staff to clean up our own properties,” he said, and suggested notifying private businesses and housing agencies who have not removed trash from their properties.

Coun. Terry Dobbin reminded council of a $30,000 fund the Northmart store gave the city as part of its “Greener Tomorrow” program for use in clean-up or other environmental initiatives.

Greener Tomorrow funds were collected from the sale of plastic bags at Northern and Northmart stores.

Granted to the city in a low-key ceremony at the Northmart store in April, the fund seemed all but forgotten until Dobbin brought it up.

“I don’t know if administration has spent it yet,” said Dobbin. “Why not just hire a group of kids, give them a stick with a hook [to pick up trash] and spend that $30,000.”

But Coun. Simon Nattaq questioned whether the city should be responsible for funding inmates’ work, when younger people of the community could benefit from the pay.

Council agreed to commit the Northmart fund to the work of both students and low-risk inmates from the Baffin Correctional Centre.

Details on whether both or one of the two would carry out the work remain to be decided. Students’ work would be carried out through public works.