Woman in Iqaluit shaken by daylight assault in public area

“I went into survival mode… and started screaming ‘Don’t f–king touch me.”

By SARAH ROGERS AND THOMAS ROHNER 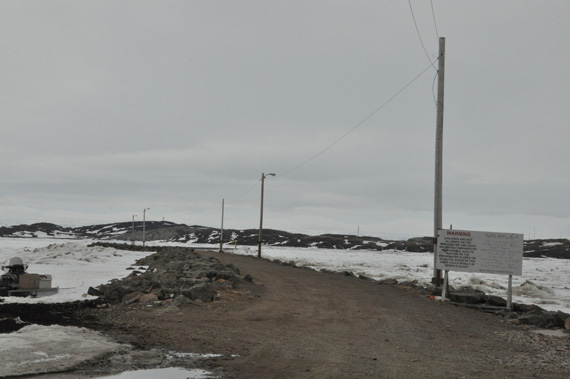 A woman walking in Iqaluit the evening of May 25 alleges she was assaulted by a man in broad daylight. (PHOTO BY THOMAS ROHNER)

Dolena Matthews was out for a regular evening walk with her dog last week in Iqaluit, when something happened that rattled her sense of security.

The setting was one she considered safe — Matthews was walking with her dog, on a well-lit May evening, in a relatively central part of town, while she spoke to her parents on a cell phone.

When she saw a man walking further ahead of her, she didn’t think much of it.

But as Matthews circled around the unloading area of Iqaluit’s breakwater, watching her dog, she said she was shocked to feel someone grab her rear end and fondle her.

“I turned around and there was that man, right in front of me,” said Matthews, who has lived in Iqaluit for three months.

“I went into survival mode… and started screaming ‘Don’t f–king touch me,” she recalled. “I hit him with my dog’s leash a few times in the head, and then he started yelling at me and grabbed my crotch.”

During the scuffle, Matthew’s attacker tripped over some rocks, but got up to pursue her again. All the while, Matthews remained on the phone with her parents, she said — screaming for help, and backing away, afraid to turn her back and run.

Once she made it back to the road, the suspect appeared to have fled, and Matthews called the police. A few children on bikes were there to confirm her story once RCMP officers arrived to take a statement.

The officers returned a few moments later with the suspect in the back of their cruiser.

Matthews said she was told by the officers that the individual had been arrested and charged in relation to the incident.

But the Nunavut RCMP has yet to say what, if any, charges or conditions the man faces.

Matthews said the RCMP officers told her to contact them if the individual ever approached her again in the community.

But she said she’d rather not risk letting that happen; Matthews packed up and flew home to Toronto over the weekend, with no plans to return north.

“I was really shaken up,” she said. “It was very surreal and crazy to think that just happened in daylight in a public area. I felt completely violated. Someone thinks they have a right to touch my body or whatever.

“I just totally felt upset about it and really pissed off.”

Assault is, unfortunately, a far too common occurrence in Nunavut.

It’s difficult to track the true number of assaults across the territory, since the vast majority of those crimes are never reported to police.

But when the Canadian Centre for Justice Statistics looked at reported assaults across the country in 2007, the centre found Nunavut had the highest rate of sexual offences in the country, at 746 per 100,000.

That figure is roughly 10 times higher than the overall rate in Canada of 73 offences per 100,000.

While Matthews knows she’s not alone, she wanted to tell her story in hopes it will ensure the same thing doesn’t happen again.

Her advice to others who are forced to defend themselves during as assault: Be as loud as you can.

“The fact that he snuck up behind me, is such a cowardly, disgusting thing,” she said.

“Even though it’s scary, try to be confident and stand your ground.”