Nunavut court will pass sentence in 2017 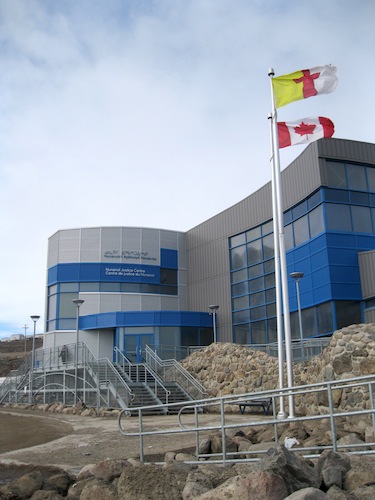 Levina Munick, 30, of Iqaluit, pleaded guilty to aggravated assault Aug. 29 for slitting a man’s throat in 2013, and incident that originally led to an attempted murder charge. (FILE PHOTO)

An Iqaluit woman pleaded guilty to aggravated assault at the Nunavut Court of Justice in Iqaluit Aug. 29, nearly three years after slitting a man’s throat.

Munick appeared before Justice Bonnie Tulloch Aug. 29 — wearing a bright blue blouse, a wide black belt and a white purse over one shoulder — to plead to the lesser charge of aggravated assault.

Aggravated assault is one of the most serious violent crimes short of a homicide.

Before then, Bedford said a pre-sentence report would be submitted to Tulloch — that’s a report usually written by a convicted offender’s probation officer to help guide the judge’s sentence.

Lyons told Nunatsiaq News the request for the delay was unusual, especially since other delays have already dragged this case out for three years.

“But at the end of the day, a guilty plea is in,” Lyons said.

No other facts of the incident were revealed in court Aug. 19.

But Lyons said the 2013 incident “involved alcohol” and left a man with a “significant wound to his neck.”

Bedford asked Tulloch to strike two conditions from Munick’s conditional release from custody, granted a few days after the 2013 incident.

Tulloch agreed to strike both conditions: one that said Munick could not be in a home or establishment where alcohol was being served, and another condition that imposed a curfew on Munick.

“Ms. Munick has been on conditional release for three years with no issues, so the Crown is satisfied these conditions can be deleted,” Lyons told Tulloch.

Tulloch did not schedule a sentencing date for 2017, but deferred the decision to pick a date later this fall.

A conviction of aggravated assault carries a maximum prison sentence of 14 years.

There is no minimum sentence, but because of the violence associated with aggravated assault, sentences almost always include time in prison.