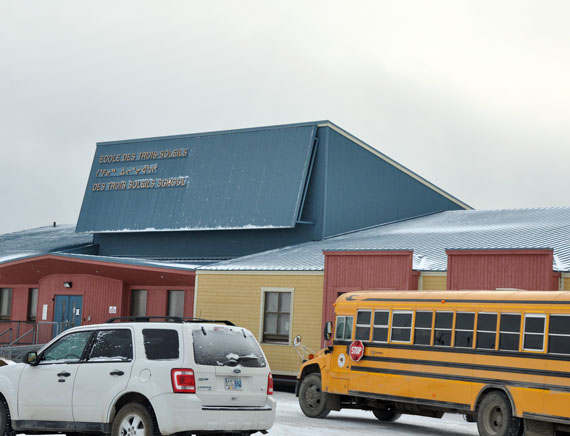 The settlement, reached in June, will see the expansion of Nunavut’s sole francophone school, École des Trois-Soleils in Iqaluit. (PHOTO BY SARAH ROGERS)

Iqaluit’s sole francophone school will be expanded, following the settlement of a lawsuit in June between the Government of Nunavut and the territory’s French-language school board.

École des Trois-Soleils first opened its doors in 2001 to a tiny population of 35 students, which has roughly tripled since.

But as the first wave of students moved through the secondary levels, the school had to rely on resources in neighbouring schools—gymnasium, classroom space and teachers—to maintain its high school curriculum. Many Trois-Soleils students ended up doing most of their secondary studies at Inuksuk high school.

The Commission scolaire francophone du Nunavut launched the lawsuit in 2015 under Section 23 of the Canadian Charter of Rights and Freedoms, which guarantees minority-language educational rights to French-speaking communities outside Quebec.

The details of the settlement remain largely confidential.

The addition to the school will include the construction of a gymnasium, four additional classrooms, and increased space for the francophone daycare it houses, Les petits Nanooks, the department told Nunatsiaq News in an emailed statement.

The funding of the expansion will be shared between the GN and the federal Department of Canadian Heritage, while Nunavut’s Department of Community and Government Services is overseeing the design and construction of the addition.

The Department of Education said it has hosted a series of preplanning meetings with the school board starting in 2014, with the most recent meeting held in February 2017.

The GN hasn’t said when the new addition is set to be complete.

The lawsuit had asked the GN’s Department of Education for funding to hire more personnel, including three more teachers, a vice-principal and a full-time secretary.

The school board also demanded “exclusive decision-making power” in hiring and establishing its own curriculum, as spelled out in Nunavut’s Education Act, though it’s unclear if the settlement touched on that.

Doug Garson, an Iqaluit parent and lawyer, welcomed the agreement and news that Iqaluit’s French school would be expanded.

Garson was the force behind the lawsuit in 2015, which he filed alongside the school board in 2015, but withdrew his involvement earlier this year for personal reasons.

He’s had two children attend Trois-Soleils, one who graduated in 2017.

“It was a project for me that I was very invested in. I felt very strongly about it and I was able to persuade the school board to join in,” he said.

“If they can make the necessary expansion to the school, there are more and more parents who will choose that option and it will draw more francophone families to Iqaluit.”

“And it’s another space and resource for the community.”