Here you can see central area of the terminal, the rotunda, with its 40-foot-high (11-metres) ceilings, from a second-floor lookout which John Hawkins, the Government of Nunavut’s Iqaluit airport director, calls his “favourite spot.” (PHOTO BY JANE GEORGE) When your flight arrives, you’ll pick up your bags at a carrousel like this one, which is now being tested. (PHOTO BY JANE GEORGE) A sneak peek at the upholstery that will cover the sofas in the public areas.(PHOTO BY JANE GEORGE) 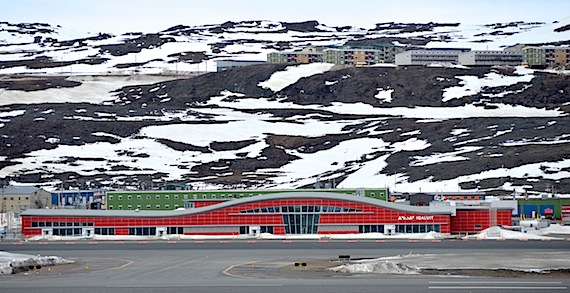 The shallow curved roof of the new Iqaluit air terminal, as seen from across the runway, is engineered to prevent snowdrift accumulation. Tall windows facing south let natural light shine deep into the terminal. The terminal’s red colour, in keeping with the colours of other buildings in the city, makes it stand out. In September 2015 a tar fire on the unfinished roof sent large plumes of black smoke billowing up and caused about $1-million in damages. While the fire didn’t end up slowing down completion of the terminal, John Hawkins, the Government of Nunavut’s airport director, says the fire stands out as the “worst” moment in the seven-year terminal project. (PHOTO BY STEVE DUCHARME)

A splendid new experience awaits air travellers to Nunavut’s capital, where builders are putting the finishing touches on the Iqaluit International Airport terminal, due to open this August.

Big and beautiful—and equipped with the latest in security, the revamped airport also hopes to attract more international flights and travellers.

The new terminal, a replacement for the now-cramped yellow air terminal constructed in 1986, won’t yet offer a concourse with duty-free boutiques.

But if you’re travelling through Iqaluit, you won’t have to lug your bags up and down frozen, slippery stairs, wait in cramped lines for service, or go without a place to sit while you wait for your flight.

Instead, you can roll your bags in from the entrance and line up in front of one of the individual counters, pass through a spacious screening area and wait for your flight on comfortable black and red chairs and oval couches, upholstered in the Nunavut flag colours of red, blue and yellow.

You’ll also be able to buy a coffee or a gift to pass the time, and log on the free wifi.

For airlines, the new terminal will bring much more counter and office space, as well as fewer baggage-related headaches.

Inside, there will also be beauty: When the terminal is finished, you’ll see reproductions of Pangnirtung tapestries hanging down from the walls. You will also see replicas of Nunavut Inuit art that is now stored at the Winnipeg Art Gallery‚ on display in cases, with one large, heavy piece of art—probably a carving—to be installed in the departure lounge area.

That’s obvious from the new set-up which includes new lounges, screening, immigration and customs, and baggage areas for passengers on international flights.

That’s what John Hawkins, the Government of Nunavut’s Iqaluit airport director, calls the “internationable part” of the new terminal.

While Hawkins said he’s not directly involved with encouraging a new airline to come into Iqaluit, he said the tourism arm of Nunavut’s economic development and transportation department is working on this

“We’re looking at what Iceland does,” Hawkins said.

Icelandair, Iceland’s national airline, invites passengers to stop over in its capital, Reykjavik, at no additional cost, with the understanding that they will spend money on hotels, food and activities during their stay.

An airline like Icelandair, which already flies to Greenland and some Canadian points, could fly in and out of Canada via Iqaluit where passengers would have the option to get off and spend a couple of days in the city.

And this could see the old residence of the Nunavut Arctic College transformed, say, into an airport hotel.

GN officials want to avoid a repeat of the attempt by Air Greenland to offer service to Ottawa and beyond that collapsed in 2011, Hawkins said—and some of that failed attempt had to do with the terminal which had no space or capacity to deal with international flights.

Now there are 16 common use flight departure stations for check-in which can be switched according to need.

There’s also room for information desks, offices—including some upstairs—along with a huge waiting area for the airport’s five gates.

Part of that area is earmarked for local flights that do not require pre-board screening. But once passengers bound for Ottawa or Montreal go through the obligatory screening, they will enter what Hawkins called the “bubble” of aviation security.

“Once you get through,” Hawkins said, during a tour of the terminal, “you’re in the same bubble you are in Pearson or Gatwick [airports].”

In Iqaluit’s new terminal, the entire departure lounge area could be made into an international “bubble” by moving a few walls.

This would have, for example, allowed the 200 passengers of the stranded Swissair flight, which made an emergency landing in Iqaluit this past February to disembark, rather than remain on board for hours.

In the future, such a space could also serve passengers from an international flight.

Behind the scenes at the new terminal there’s also an advanced baggage system.

“This is a big improvement because our current baggage handling system was put in after 9/11,” Hawkins said. He compared the environment to working in a sardine can.

But in the new airport, once you check your bags, a conveyor belt will bring them upstairs for X-ray screening and then down again to be loaded on aircraft.

A rapid-roll fabric door will shut behind the vehicles carrying bags for limited heat loss.

And when your bags come off the plane, they will go onto two big carousels—so no more scrambling to grab your belongings before they hit the end of a short belt and roll on top of each other.

The terminal’s mechanical rooms contain turbines that produce power and heat to keep the airport running, part of the building’s silver LEED green certification which includes making sure everything used in the building, even coffee machines, is energy efficient.

While the terminal seems longer at 140 metres or 459 feet than it needs to be, it’s not because of the people inside: It’s because they have to park airplanes, which take up a lot of space, by the five gates.

“That’s why this is such a narrow building and so long,” Hawkins said.

But for him, it’s what’s outside the terminal that really counts—the repaving of the runways and aprons, and upgrades to the landing system, he said‚ and soon, a separate, new two-year project to bring the lighting system up to par, which the Nunavut Impact Review Board recently approved.

Arctic Infrastructure Partners built and will manage the new $300-million airport complex for the next 30 years under a private-public-partnership, or P3, to which the federal government gave $77.3 million.

The Winnipeg Airports Authority will act as their “service provider” through a company called Nunavut Airport Services Ltd. which is already managing the Iqaluit airport for the GN.

The grand opening of the Iqaluit International Airport is slated for Aug. 18, when a pan-northern Arctic airshow will wind up in Iqaluit, although passenger traffic will switch over to the new terminal about 10 days before that date. At the front of the new Iqaluit terminal people will arrive from one end of the terminal, where travellers can immediately enter the check-in area, and leave the terminal from the other end, after picking up their bags. A parking lot will accommodate 100 vehicles, about three times more than the lot near the old terminal can.(PHOTO BY JANE GEORGE)