“What a privilege to be given the opportunity to serve” 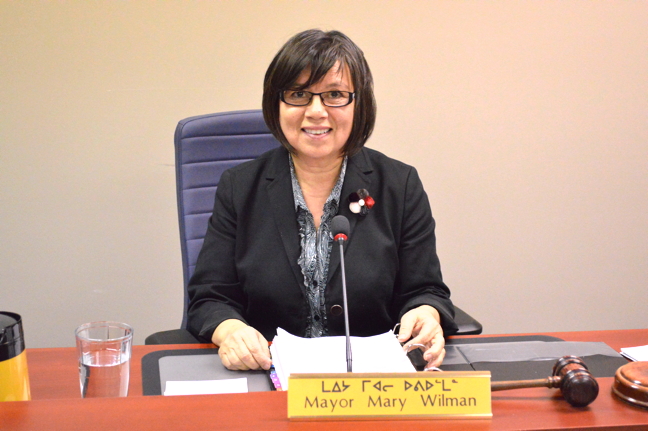 The final city council meeting within Mary Wilman’s tenure as Iqaluit’s mayor was more about looking back than looking ahead, as she delivered one final statement to councilors Oct. 28.

“I would like to express my sincere thanks to Iqalungmiut for allowing me to represent you these past six years. I have thoroughly enjoyed my time here and one I will always treasure. What a privilege to be given the opportunity to serve,” the outgoing mayor said.

Wilman secured less than a third of votes cast in the Oct. 19 municipal election, finishing second to mayor-elect Madeleine Redfern.

Only four councilors attended the final council meeting, but they also commented on the legacy of the outgoing administration.

Simon Nattaq, who narrowly won re-election as a councilor, thanked his colleagues for their service to the city over the past three years.

Noah Papatsie, who finished last in the mayoral election and will not be returning as a city councilor, also extended his gratitude.

“There’s a lot of information to grasp. It takes you a good year to get your head around things, so I was just hoping that there would be some kind of package to get this up to speed on what’s happening,” said Dobbin.

“Thank you everyone for the last three years,” said re-elected councilor Joanasie Akumalik.

“There was a lot of business, and the most memorable was the dump fire and it was very challenging… We worked as a team. We were working to do the best we can,” he said.

Iqaluit’s dump fire, which raged through the summer and fall of 2014 and cost the city $4 million to extinguish, came to symbolize the fiscal woes this council has faced during its tenure.

Much of that financial problem-solving has fallen to Iqaluit’s newly hired chief administrative officer Muhamud Hassan.

His efforts since March to balance the city’s books won the greatest amount of praised in Wilman’s statement.

“To Mr. Hassan, thank you for taking on the CAO position. I hope that you will be able to work with the new council and to make the changes that are needed and the work that this council has begun, I wish you all the best,” she said.

Hassan replaced interim CAO John Mabberi-Mudonyi, who had been filling the position since the last full-time CAO, John Hussey, was fired by the city in 2014.

The outgoing mayor also thanked sustainability coordinator Robyn Campbell for her work implementing the city’s long-term development plan, which was adopted in 2014.

“Robyn produced an excellent sustainability plan for Iqaluit during our term. This document is done with IQ perspective and is an award-winning document. You have and continue to put the city in a good image,” said Wilman.

Madeleine Redfern and Iqaluit’s new city council will be sworn in at the Nunavut Court of Justice Nov. 2.