Inhabit Media wants to tell traditional stories, “because they are important for history, but we also want to tell contemporary stories” 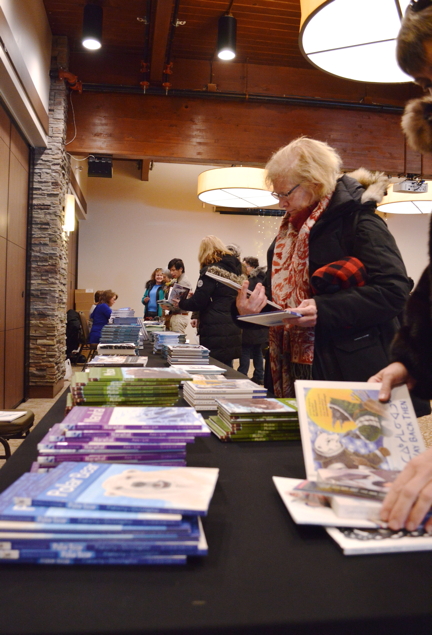 Book fans check out Inhabit Media titles at a publisher’s meet-and-greet event in Iqaluit Feb. 18. The Iqaluit-based publishing house hopes to strike a balance between traditional and contemporary Nunavut stories, while avoiding being pigeonholed as an Indigenous publisher. 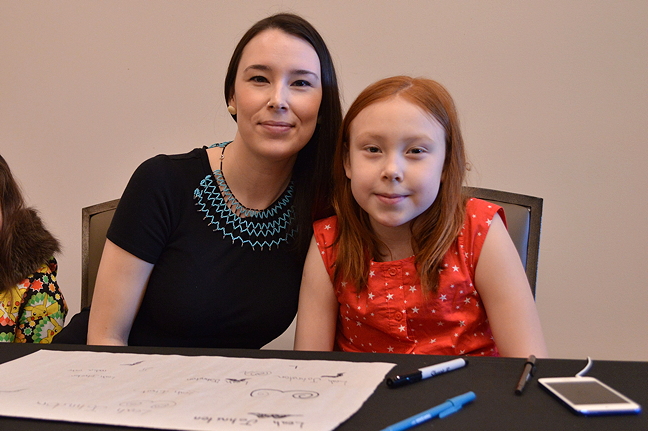 The renowned Igloolik-born artist Germaine Arnaktauyok scrawls her name, first in Inuktitut and then English, across the opening pages of her latest collaboration—a children’s book written by Neil Christopher entitled Those That Cause Fear—before handing it back to a devoted fan.

“You can scare you kids!” Arnaktauyok jokes to the mother, referring to the occasionally creepy but always stunning artwork accompanying the book’s tales of creatures from Inuit myth.

Arnaktauyok and a host of other artists met long lines of admirers during a special book and print signing hosted by Nunavut-based publisher Inhabit Media, Feb. 18, in the Koojesse Room of Iqaluit’s Frobisher Inn.

For the publisher the event was unprecedented in its scope and more than a bit of a gamble financially, said Neil Christopher who, along with being an author, is also Inhabit Media’s co-founder.

Flying in so many artists from across the North isn’t cheap.

But the signing, coinciding with Nunavut’s Inuktitut Language Month, was all about Inhabit Media taking the next step.

Since its founding in 2006, the publisher has seen slow but steady growth, and its expanded presence in both local and international markets comes with increasing responsibilities to celebrate—but not stereotype—life in Nunavut.

“We’re trying to represent Nunavut as it is, not as [the world] thinks it is,” Christopher said.

The solution, he explained, is to mix old and new, spread throughout the publication run which drops about 20 new titles on bookstore shelves every year in Nunavut, the United States, the United Kingdom and even as far away as Australia.

“We want to tell traditional stories because they are important for history, but we also want to tell contemporary stories,” he said.

Children’s book Leah’s Moustache Party, written by author Nadia Mike, is one of the latter.

Loosely based on her daughter, Leah Johnston, Mike’s book celebrates individuality and expression through dress-up.

“If you look at it, you might not think that it’s a northern story, but it is,” Christopher explained.

Mike says stories like hers are important for northern youth to read in familiar environments, even if the messages themselves are more universal.

“They’re extremely important, especially for the kids in primary school to be able to relate to themselves and settings culturally appropriate to them,” Mike said.

Books such as Mike’s, combined with the preservation of more traditional Inuit stories, round out the breadth of Inhabit Media’s mission statement.

“That’s the kind of stuff I like. I like legends and myth,” Arnaktauyok said about the power of Inuit stories for youth. “With me, that’s how I used to go to sleep, my father told me scary stories.”

“They’re written now so you don’t have to remember every word,” she added.

Arnaktauyok said her latest art project, exploring the Tuniit, mythical giants from Inuit legend who were likely Dorset people, will be released “in a year or so.”

“There is so little information, according to the older Inuit… I don’t want to make things up,” she said about her research into the Dorset culture, which precedes the direct ancestors of modern-day Inuit—the Thule.

Whatever side of the spectrum these stories and artwork find themselves on, Christopher says it’s an exciting time for Indigenous artists to speak to the world and control the narrative.