Experts consider accelerating the burn or dunking it in water 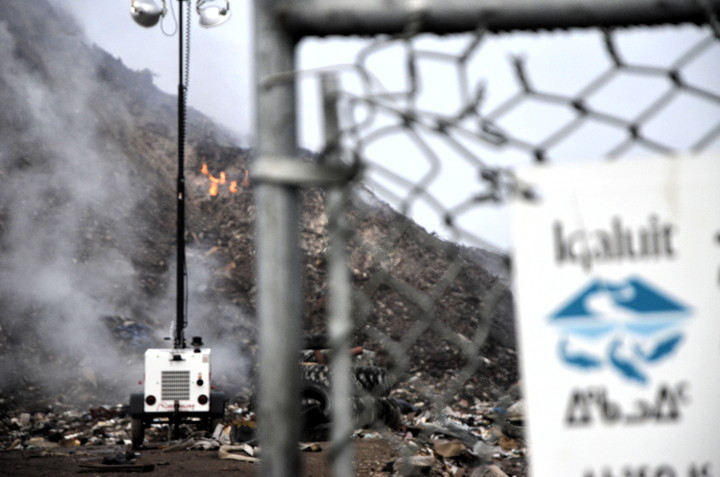 Iqaluit city councillors continue to wrestle over what to do about the municipal landfill site which has been smouldering and spewing smoke since May 20. (PHOTO BY DAVID MURPHY)

If Iqaluit’s fire chief Luc Grandmaison had his way, he would fan the flames on the city’s infamous dump fire to accelerate the burn, effectively burning the pile of garbage to the ground quicker.

That’s one of the solutions Grandmaison offered to Iqaluit City Council June 24 in an hour-long update on the landfill fire.

“I support any acceleration process, that’s for sure. Because I know if it burns harder, it’s going to dissipate less smoke,” Grandmaison said.

In fact, officials from the Government of Nunavut’s department of environment and Aboriginal Affairs and Northern Development Canada, proposed the same thing, earlier on June 24 — to accelerate the burn in a test pilot.

“People feel that this fire can go away quicker if we accelerate the burn process. It will produce less smoke. Less particles in the air,” Grandmaison said.

That process would involve shoving a pipe into the dump fire to introduce more air.

“The air blowing in at specific places could help up the combustion,” Grandmaison said.

Environment Canada and Health Canada would help measure the effects of this test pilot project. Canadrill will also help with the strategy, Grandmaison said.

Another bold option Grandmaison relayed to council involves building a gigantic pool of water and depositing flaming debris into the pool.

“So basically scooping it. Reducing the heat. Dunking it. Strain it. Put it back on the landfill,” Grandmaison said.

That idea comes from Dr. Tony Sperling, a landfill fire expert who’s making his way to Iqaluit June 27 to assess the dump fire for four days.

The city of Iqaluit hired Sperling, at a cost of $350 an hour, to help find a solution for the landfill fire which has been spewing foul-smelling smoke into the city for 35 days now.

Grandmaison said Sperling is a landfill engineer and has worked in extinguishing landfill fires since 1998. Sperling has previously worked on 27 “fire suppression projects” in Canada, the USA, Mexico, Panama and Israel.

“In order for him to continue helping us, he must assess the situation on his own,” Grandmaison said.

An environmental lawyer has also jumped on board to provide guidance, as well as a consortium of other city, territorial and federal officials.

Grandmaison was not keen on the scoop-dunk-strain idea. That would take about two months to complete, he said.

City councillor Kenny Bell questioned why dousing the burning pile of garbage with water, potentially spilling chemical runoff into the nearby Frobisher Bay, is such a bad idea.

“We’ve pumped sewage into the ocean every single day, we have for many, many years,” Bell said by teleconference.

But that’s the worst way of dealing with the fire, Grandmaison explained. Plus Environment Canada advised against this plan, he said.

“If [the runoff is] not contained, this could cause a violation of the Fisheries Act which could lead to charges against the city,” Grandmaison said.

Water sprayed on the 10 metre-high dump wouldn’t work either.

“The water cannot go to the bottom of the waste dump. The maximum distance it will travel is from three to five metres before it seeps away,” Grandmaison said.

It’s like a wood-burning stove, Grandmaison explained. Spraying the top of the stove won’t work — you have to open the door and get into the middle of the fire to put it out.

Possible solutions might be implemented as early as next week, Grandmaison said, but he warned that it will take a while before it’s fully extinguished.

“That’s the reality we must face,” he said.

Councillors spent a while discussing the mixed bag of garbage in the dump fire, which includes cardboard and wood, and asked why it isn’t being sorted before going into the landfill.

The city has already created a new pile of garbage over a metre high in a temporary site at the scrap dump next to the dump fire.

“What’s happening is all our garbage is going back in there and we’re recreating this again,” deputy fire chief George Seigler said.

Councillors seemed shocked that garbage isn’t already being separated out and sorted.

Councillor Romeyn Stevenson read a motion to come up with an immediate plan to sort garbage at the dump to mitigate any future fires. Councillors said the public might have to help in sorting their garbage in the future.