Nunavut Impact Review Board hearings scheduled for Jan. 27 to Jan. 31 in Pond Inlet 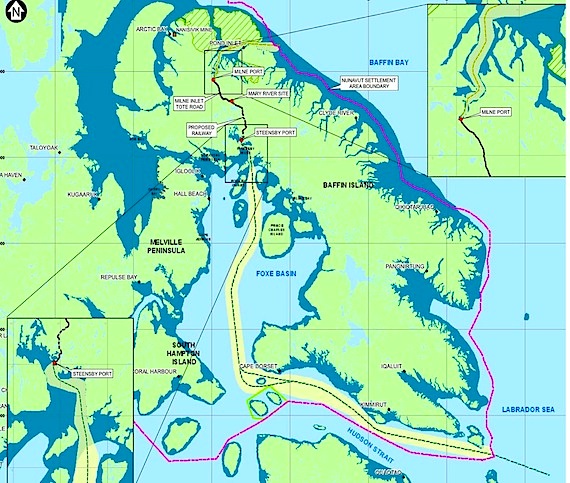 This map from the environmental impact statement on Baffinland’s Mary River iron mine project shows the location of the mine, and original shipping pathways from 2012. (FILE PHOTO)

NIRB’s hearings will assess the potential impacts of Baffinland’s revised plan to extract and ship iron ore out of a mine some 160 kilometres south of Pond Inlet.

Plans drafted in 2012 called for the ore to be transported south by rail to Steensby Port, and out of Steensby Inlet south of the mine.

After public hearings by the NIRB, the Baffinland received a project certificate for the first version of their proposal.

The corporation changed those plans at the start of 2013.

To cut costs and earn sales revenue more quickly, Baffinland proposed instead to transport the material north of the mine and out of Milne Inlet, at the north end of Baffin Island. This plan calls for ore to be shipped out of a facility called Milne Port, near Pond Inlet.

As it did in 2012, IsumaTV will broadcast NIRB’s next hearings via online radio and video through its Digital Indigenous Democracy site.

“These hearings are likely to be more contentious than the first round in 2012,” IsumaTV stated in a news release announcing its broadcast plan, Jan. 20. “Both the Hamlet of Pond Inlet and the community’s Hunters and Trappers Organization as well as two individuals from the community, have filed formal interventions.”

The online broadcaster announced it will stream each day of the NIRB hearings live in Inuktitut and English, starting Jan. 27 at 9:00 a.m. Eastern Standard Time, through Igloolik’s online radio hub.

Also, Zacharias Kunuk of IsumaTV will host a live bilingual TV talk show every evening after each day’s hearing “to address issues raised at the hearings with community members and participants,” the broadcaster said in the release.

Live video coverage and additional footage will also be available on the site.

The Nunavut Planning Commission has already held public hearings on the project in five communities, Jan. 7 to 10, to verify that the revised transport route for the ore complies with the North Baffin regional land use plan.