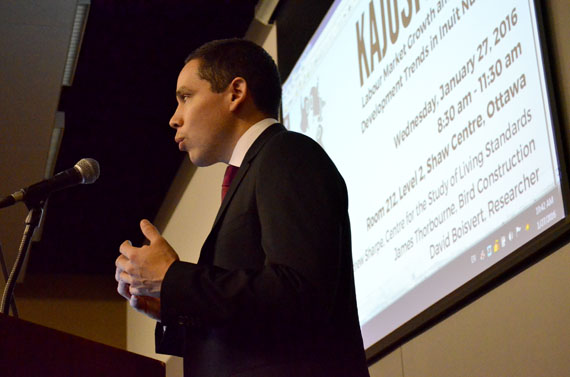 ITK President Natan Obed speaks Jan. 27 at the Northern Lights 2016 trade show in Ottawa. ITK is sponsoring a series of in-depth workshops — through a project called Kajusivugut — on the Inuit Nunangat labour market, aimed at finding better ways to fund and deliver training programs for Inuit. (PHOTO BY JIM BELL)

OTTAWA — The Inuit Tapiriit Kanatami is proposing to work with Prime Minister Justin Trudeau’s government on a joint political body that would create a new relationship between Inuit and the federal government, ITK president Natan Obed said Jan. 27.

Obed said ITK pitched the idea to Trudeau at a history-making meeting held Jan. 26, when Trudeau became the first prime minister to hold a formal meeting with Inuit leaders at ITK’s Ottawa office.

“We at ITK have suggested that there be a senior political entity that has representation from the federal government and the Inuit leadership that works through how we get to that next level in our relationship and in normalizing our relationship,” Obed said in an interview.

One of the three big topics on their agenda was the “overarching relationship” between the Crown and Inuit, said Obed, who has stated earlier that one of the goals of his presidency is to create a new Inuit-Crown relationship.

To that end, he said ITK has proposed a new high-level body through which Inuit leaders and federal politicians would go beyond “broad statements and broad pledges” and make “a political commitment for change.”

“It would be a political body that would make things come into reality and I would imagine it would have a short work-plan that would be based on a few of the shared big picture things we said we were going to do,” Obed said.

It’s likely that if the bilateral action group is formed, their first step would be development of a work-plan.

An important feature of this meeting is that Inuit leaders set the agenda.

The work of developing that agenda began after this past Dec. 16, when Obed invited Trudeau to meet with ITK.

Because of the advance preparation, the gathering became a “working meeting,” Obed said, to figure how to bring Inuit and federal government priorities together.

He said he believes that the current federal government is prepared to find a “new way” of implementing land claims agreements based on their spirit and intent, rather than on the letter of the law.

Jan. 26 was also a big deal for ITK’s staff, all of whom were involved in the excitement of Trudeau’s visit.

“We had everyone congregate in the lobby and as the prime minister came in he jumped into a group photo with all of our staff,” Obed said,

“It only took a couple of minutes, but it meant the world to people who had been working on Inuit issues for a long time.”