But forecast calls for flurries along the Hudson coast 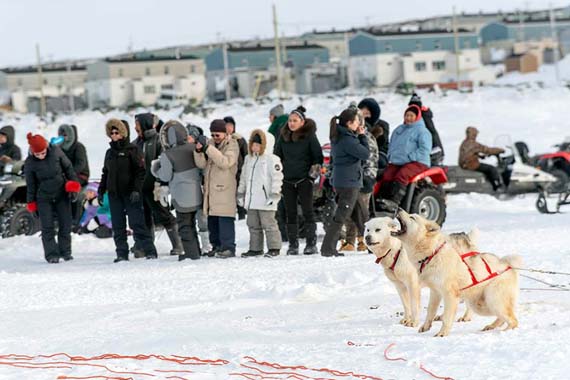 Let’s go already! A lead dog howls in anticipation at the starting line of Ivakkak 2017, which departed from Umiujaq March 28. The race’s 13 participating teams made it to their first checkpoint 53 kilometres up the Hudson coast, while teams are expected to complete another 80 kilometres March 29. (PHOTO BY P. DUNNIGAN/MAKIVIK)

If the first day of Ivakkak’s 2017 edition is any indication, Tasiujaq musher Willie Cain Jr. has a good chance of winning Nunavik’s dog sled race for a second year in a row.

The 13 teams competing in Ivakkak 2017 left Umiujaq March 28 in bright sunshine and mild temperatures, heading north up the Hudson coast.

He’s running his 14th race this year, with co-musher Putulik Saunders. The pair reached the race’s first checkpoint, Majuriarvik, March 28 in four and half hours.

The first 50-kilometre leg of the race was short for a reason; organizers say it helps to ease competitors into the race and allows mushers to evaluate the strength of their dogs.

Teams are back on the race route March 29 and are expected to travel between 70 and 80 kilometres to the race’s next checkpoint. The 250 kilometres between Umiujaq and Inukjuak is the longest stretch between two communities.

Mushers will also stop in Puvirnituq and Akulivik before arriving at the race’s finish line in Ivujivik.

The race route, which alternates each year between the Ungava and Hudson coasts, varies in length from year to year, but typically takes between 10 days to two weeks for teams to complete.

The race was already delayed a day; Ivakkak was originally scheduled to leave Umiujaq March 27. The weather cleared for the March 28 departure, but Environment Canada is forecasting flurries along the Hudson coast March 29 and 30.

Makivik Corp. launched the first Ivakkak race in 2001 to encourage Nunavimmiut to revive and maintain the tradition of dog sledding, a practice that was nearly lost when the RCMP killed Inuit sled dog teams in the 1950s and 60s.

Today, the tradition has grown in popularity and has taken hold in some communities more than others. In this year’s race, for example, only five of Nunavik’s 14 communities are represented. Puvirnituq has four teams competing; Kuujjuaq and Quaqtaq have three teams each; Tasiujaq has two teams and Kangiqsujuaq has one.

You can follow the teams’ progress from Ivakkak’s live tracking tool here.