“He had a fearless appetite for skewering the bureaucracy” 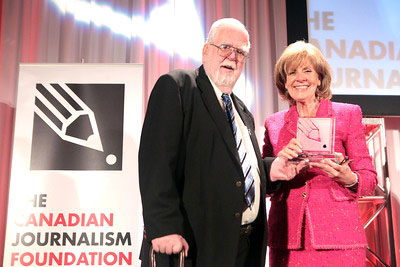 The late Jack “Sig” Sigvaldason, 84, a big man with a big vision who brought the printed word to every corner of the Northwest Territories and Nunavut, died Aug. 9 in Ottawa, nunavutnews.com reported last week.

His legacy is Northern News Services Ltd., the company he began building in 1972 after he launched the Yellowknifer, the first of six weekly newspapers that serve readers and advertisers across the two territories.

“He really believed in the power of print to give people a voice,” Bill Braden, a former NNSL employee, told Nunatsiaq News.

Braden, who now operates a photography business in Yellowknife, worked for many years at NNSL as a photographer and reporter and was the first reporter Sigvaldason hired for the Yellowknifer.

“He was big man physically with a passion for the newspaper industry,” Braden said.

Sigvaldason, who had previously worked mostly in advertising, moved to Yellowknife with his family from Winnipeg in 1969 to work as the editor of News of the North. He started the Yellowknifer in early 1972 after getting fired from News of the North, Braden said.

And that firing appears to have been rooted in his fearless approach to news.

Sigvaldason bought News of the North in the late 1970s and changed its title to News/North. And throughout his career, Sigvaldason continued to use his newspapers to publish stories that took aim at the powers that be.

“He really championed the little guy. He had a fearless appetite for skewering the bureaucracy. He was popular,” Braden said.

Following the launch of the Yellowknifer, Sigvaldason’s business expanded over the years to include such titles as News/North, Kivalliq News, the Inuvik Drum, the Hay River Hub and Nunavut News.

NNSL’s bureau staff in outlying communities like Iqaluit, Rankin Inlet and Inuvik send their materials to Yellowknife, where the newspapers are printed at another one of Sigvaldason’s Yellowknife-based businesses: Canarctic Graphics.

The Canadian Journalism Foundation honoured Sigvaldason in 2012 by presenting him with its lifetime achievement award. In his acceptance speech, he said the award should really go to the people of the North.

“Jack Sigvaldason’s dedication to connecting people through telling their stories and sharing the news cannot be understated. Sig’s’ legacy—Northern News Services—has been a valued part of N.W.T. community life for close to 50 years,” McLeod said.

The staff of Nunatsiaq News and Nortext Publishing Corp. offer our condolences to Sigvaldason’s family and the staff of NNSL.