“Now the pressure is there” 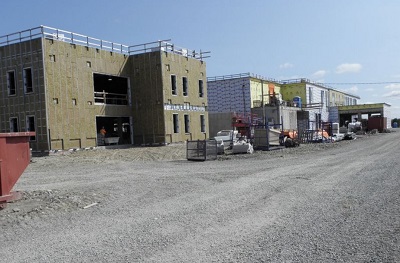 Quebec is building a new 220-person jail in Amos, in the province’s Abitibi region, set to open this fall. Nunavik police and justice officials hope to have an air link in place by 2019 to fly detainees directly to Amos, to speed up court appearances and bail hearings. (PHOTO COURTESY OF MSP QUEBEC)

KUUJJUAQ—The Kativik Regional Police Force is working with Quebec correctional officials to establish an air link between Nunavik and Amos, to help ease the transfer of detainees to and from the region.

“The cost of transferring detainees is great, at about $3.5 million a year,” Larose told Kativik Regional Government council meetings in Kuujjuaq on Sept. 12.

“It’s not only a financial issue, but for the condition for our detainees and to let them appear [in court] within a reasonable delay.”

Discussions about a chartered air link were first raised in response to a 2016 report by Quebec’s ombudsman, who flagged substandard detention conditions in Nunavik and long travel and wait times for accused Nunavimmiut awaiting their first court appearance or bail hearing.

Offenders who are arrested in Nunavik are held in a local police detachment station until they make a first court appearance by telephone. But if the prosecutor objects to their release, offenders must travel south for a bail hearing.

In the absence of a regional jail, roughly 700 detainees are flown out of Nunavik each year, with 70 per cent of them bound for Montreal.

But the ombudsman’s report found that up to 14 days can pass between a prisoner’s arrest and their arrival at their hearing in Amos, often via Montreal.

Now a new lawsuit has pushed the issue to the forefront again. A class action against the Quebec government seeks compensation for Nunavik residents who are held in custody in the south for unreasonable periods of time.

According to Section 515 of the Criminal Code of Canada, this wait for a first appearance or a bail hearing should be no longer than three days, unless those arrested have consented to the extra time in jail.

“We’ve been talking about this for many years,” Larose said. “Now the pressure is there.”

Larose believes a regular chartered flight travelling between Nunavik communities and Amos would help reduce both the waiting time and the cost of flying detainees out of the region.

“That would mean all the Nunavik communities coming to bring detainees to Amos,” he said.

“We would hire some experienced correctional agents [to escort the detainees] because I want to leave my police officers in the communities,” he added. “Otherwise it takes them off the job for two to three days.”

Nunavik’s leadership has also made a push to streamline Nunavik’s out-of-region detainees and correctional services.

Once the newly renovated Amos jail opens in the fall, detainees awaiting court dates and sentencing will be housed there, while Nunavik detainees will serve sentences in either St. Jerome’s men’s jail or Leclerc’s women’s jail, both just north of Montreal.

Regional organizations decided they could better provide Inuit-specific services to inmates in the Montreal area, where there are already a number of programs in place.