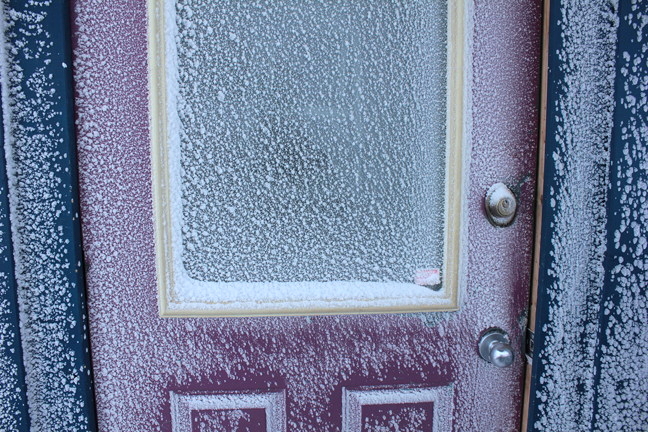 Has your door looked like this lately? Environment Canada says El Niño will likely cause more unsettled weather in the Baffin region this spring. (PHOTO BY LISA GREGOIRE)

Blizzard blues got you down?

Don’t hate the messenger, but expect Iqaluit’s onslaught of stormy weather to continue, at least for the foreseeable future.

That’s according to recent forecasts by Environment Canada, which predicts more blizzard-favorable weather in store for South Baffin into the coming weeks.

Or months? Lets hope not.

“What you’re experiencing is likely to be what you’ll experience over the next little while,” Environment Canada meteorologist Brian Proctor told Nunatsiaq News April 20, as municipal services were once again suspended in Iqaluit due to high winds and snow.

So what’s to blame for the high volume of storms Iqaluit has endured since March?

“It tends to be one of the factors that causes a high-altitude flow pattern over western North America,” Proctor said.

The weather phenomenon set up a near-constant high-pressure system over western Canada, which contributed to the relatively dry and warm winter felt in the Yukon and Mackenzie Valley.

In layman’s terms, the swirling warm air on that side of the country is creating a funnel for low-pressure systems — and storms — to shoot out across Hudson Bay and over Baffin Island.

“Pretty significant storms have been able to develop on the downwind side of the Mackenzie Valley area and then track eastwards and northwards across Hudson’s Bay… and really deepen significantly as they move through that area.”

As a storm moves over water, it picks up moisture and builds strength — the end being multiple days sipping hot chocolate while binge watching your favorite TV shows as windows and doors are slowly buried by blowing snow.

But let’s be honest — you might have finished the best TV shows weeks ago and are surviving off leftovers and reruns of MASH and Law and Order: SVU.

According to Environment Canada, El Niño is expected to decrease in strength as summer approaches, and the eastern Arctic can expect a return to “norms” by July.

That forecast seems to compliment a recent report on Arctic weather published by Natural Resources Canada, which concluded climate change is likely to lead to more precipitation and more unpredictable weather into the coming years.

In the Kivalliq, spring forecasts have been inconclusive, according to Proctor.

That’s because most of the region is sitting on the “cusp point” between the high-pressure systems in the West caused by El Nino and the low-pressure funnel pointed towards the eastern Arctic.

Basically, until El Niño runs its course, expect the unexpected.

So it’s probably a good idea to keep those shovels handy, for now.