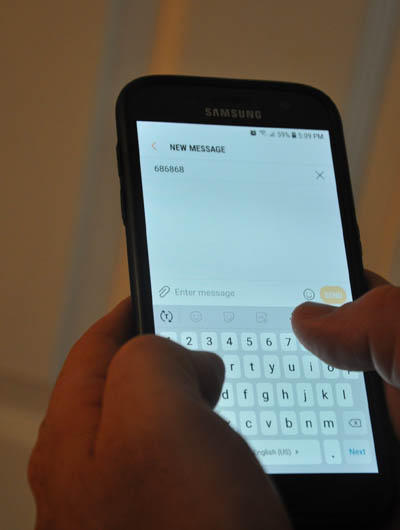 Youth in Nunavut can now text 686868 to communicate with a crisis responder for free and anonymously. (PHOTO BY SARAH ROGERS)

Nunavut youth have a new way to reach out for help.

Kids Help Phone launched its new crisis texting service across the territory on June 27, which allows youth to text with a crisis responder anonymously and for free.

The nationwide youth counselling and support service teamed up with the non-profit Canada Health Infoway earlier this year to launch the new text line, with plans to gradually roll it out across the country.

But when Kids Help Phone heard about the two recent deaths of young Inuit men in Iqaluit by suicide, they accelerated their efforts to offer the service to Nunavummiut.

“We feel we must take action now and decided to offer our support to youth and families in the Nunavut communities through our crisis texting support service,” said a Kids Help Phone spokesperson.

But the swift service is also thanks to an Iqaluit resident who happens to sit on the Kids Help Phone’s youth advisory council.

Kieran Drachenberg, 18, a new graduate of Inuksuk high school, has volunteered with the phone support service for the last nine years.

He and his mother, Catherine Lightfoot, reached out to the organization last week and said the Kids Help Phone staff helped ensure the texting option was working in Nunavut “within a matter of hours.”

Rather than call and speak to a counsellor, youth who are struggling with negative feelings or even suicide can now text 686868 to communicate with a crisis responder.

“I think the big issue with phone calling is a lack of privacy,” said Drachenberg.

“Especially in Nunavut, where there’s a real issue with a lack of privacy in homes. It’s hard to make a phone call.”

The texting option also gives users time to put thought into what they really want to express, Drachenberg said.

The service is only available in English, 24 hours a day.

The Crisis Text Line works on any text/SMS-enabled cell phone where there is cellular service. It doesn’t require an internet connection or an app.

The texter’s phone number does not appear to the crisis responder, and all the information a text shares remains confidential unless it becomes necessary to contact emergency services.

Kids Help Phone still offers phone counselling at 1-800-668-6868 and an online chat service for those who prefer to communicate that way.

Kids Help Phone has been available for residents in Nunavut since it launched its service in the territory in 1989.

According to its statistics on users who identify where they’re from, youth in Nunavut make up about 0.3 per cent of all of Kids Help Phone’s counselling sessions.

“This shows us that we can and must do more to ensure young people in the territory know about our service and the other support helplines available,” a spokesperson from the organization said.