“It requires wind, snow and ice — and that’s what we have an abundance of here” 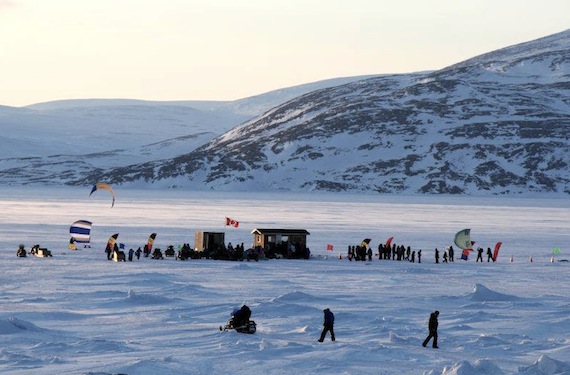 Nunavik kite-skiers take part in the Nunavik Kite-Ski Championship’s opening ceremonies April 17 in Kangiqsujuaq. The event is hosting competing skiers from six communities from April 18 to 22. (PHOTO COURTESY OF KRG)

Over the next few days, colourful and billowing sails will dot Wakeham Bay as the community of Kangiqsujuaq hosts Nunavik’s first-ever kite-ski championship.

Kite-skiers from six communities set sail along the bay April 18, competing with other racers during the five-day event organized by the Kativik Regional Government.

“I can’t tell you how many people have come up to me and asked ‘What’s this kite-skiing I keep hearing about?’” said Ben Whidden, a recreation development advisor at the KRG and one of the event’s co-ordinators.

Kite-skiing is a wind-powered sport where an individual rider on skis uses a large kite as a sail to travel across ice and snow.

Although the sport developed in the South, kite-skiing is well adapted to the Arctic, Whidden said, where it’s attracted a number of mostly young, Inuit men.

“It requires wind, snow and ice — and that’s what we have an abundance of here,” he said. “We’re really happy we’ve reached out and made contact with the region.”

This week, kite-skiers from Quaqtaq, Kangirsuk, Kuujjuaq, Aupaluk and Puvirnituq will ride with local skiers in Kangiqsujuaq, one of the first communities to take an interest in the sport.

Many of those communities now offer equipment to local riders, set up in sheds by the shoreline.

Kite-skiing, or paraskiing (the difference being the length in ropes used to attach the sails to the skis) first took off on the Ungava coast but it slowly making its way into Hudson Bay communities.

“The kids in POV can’t get enough of it,” Whidden said.

The growing popularity of paraskiing and kite-skiing across the Arctic has grabbed enough interest across the region that the KRG offered a kite-ski training program in five communities this past winter.

An instructor visited the communities to teach new and developing riders about equipment, technique and safety, while training two riders to serve as local instructors.

This week’s championship is the fruit of those efforts, Whidden said, bringing skiers from across the region together to test their new skills.

Riders will participate in three different competitions, including the triangle race, where riders must collect tags over a set course, short-distance speed racers and long-distance treks.

The kite-ski championship isn’t the first time competition in Nunavik — the region has previously hosted Arctic Wind Riders competitions, through a Quebec-based paraski program that works with communities across the Arctic.

This event is Nunavik-focused, although riders will be treated to a presentation from Iqaluit’s Eric McNair-Landry, who will talk about his 3300 kilometre kite-ski trip through the Northwest Passage last spring.

Organizers hope this year’s competition will inspire new kite-skiers across the region.

“We’re hoping that those who come can take it back to their communities,” Whidden said. “We’d really like to get this going across the region.”