“Nobody really knows if the numbers are down, but they are moving away from the area” 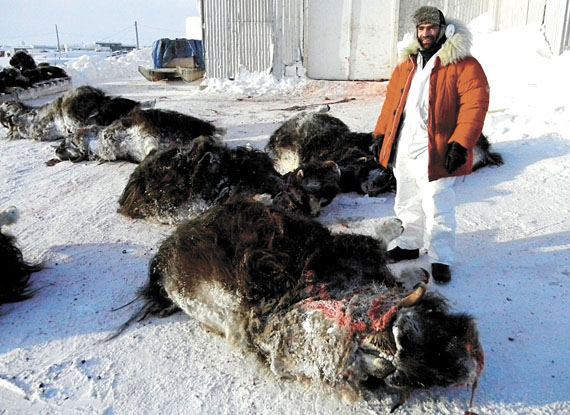 Mathieu Dumont, the Government of Nunavut’s regional wildlife biologist for the Kitikmeot region, in February 2011 with freshly-caught muskox outside the Kitikmeot Foods Ltd. plant in Cambridge Bay. The annual muskox hunt normally provides horns, qiviuq and about 25,000 pounds of meat to Kitikmeot Foods, which is owned by the Nunavut Development Corp. and the Ikalututiak Hunters and Trappers Organization. Next February, however, the hunt will be cancelled. (FILE PHOTO)

There won’t be a commercial muskox hunt this February for Kitikmeot Foods near Cambridge Bay, board member Bill Lyall said Dec. 17.

The company, a Nunavut Development Corp. subsidiary, normally harvests about 200 muskox a year, as well as Arctic char.

But they decided to cancel a muskox harvest planned for mid-February to mid-March because of low numbers of muskox around Cambridge Bay, he said.

That decision was made after last year’s harvest took longer than normal, and in the usual harvesting areas northwest of Cambridge Bay, Lyall, who hunts muskox himself, says the animals are no longer in the area.

“It’s really noticeable about a year after, that area where we do the harvest, it looks like there are less and less animals each year,” he said.

The community noticed these disappearances as well, so the decision was made collectively, Lyall said.

“It’s very noticeable that there’s no animals, even by airplane when you’re flying,” he said.

Lyall said the animals are moving north of the community.

And east of Cambridge Bay “you might not see a muskox for a whole day,” he said, adding that in past years the animals used to be spotted only 15 or 20 minutes from town.

“Nobody really knows if the numbers are down, but they are moving away from the area,” he said.

Previous estimates of the muskox population near Cambridge Bay range up to about 30,000 animals.

But this past July, a report by the Government of Nunavut’s Department of Environment, presented to the Nunavut anti-poverty secretariat, said that while certain muskox populations need updated data, some of them could be harvested, including the population on Victoria Island which they said remains abundant.

But Lyall said it’s better to wait and see what happens over the next year than to continue harvesting the muskox.

Kitikmeot Foods, which usually hires about 30 people, including hunters, to help with the yearly muskox harvest, will lose between $140,000 and $145,000 dollars in revenue, general manager Stephane Lacasse said.

But “by purchasing and acquiring some fish from other communities, we kind of compensate for the loss,” he said.

Kitikmeot Foods will also do some winter fishing to “just to keep rolling basically,” Lacasse said.

Lacasse said that canceling the muskox harvest won’t be “substantial” because the Cambridge Bay plant harvests Arctic char all year round.

That char is processed and sold as fillets, lox and jerky within Nunavut, across western Canada and in the United States.

However, the sustainable use of natural resources such as muskox takes precedence over economic impact, a Kitikmeot Foods news release said.

There is the option of resuming harvesting in 2014, but that will depend on the status of the muskox population.

Kitikmeot Foods showed a profit in 2010-11, but the company, newly registered with the Nutrition North Canada program as a northern food processor, showed a loss of $99,153 in 2012, even though sales had gone up.

The company says they plan to continue working with all stakeholders, especially the Ikaluktutiak Hunters and Trappers Organization, to ensure the shared muskox population is managed for “the benefit of all.”