Kivalliq mine workforce worth its weight in gold 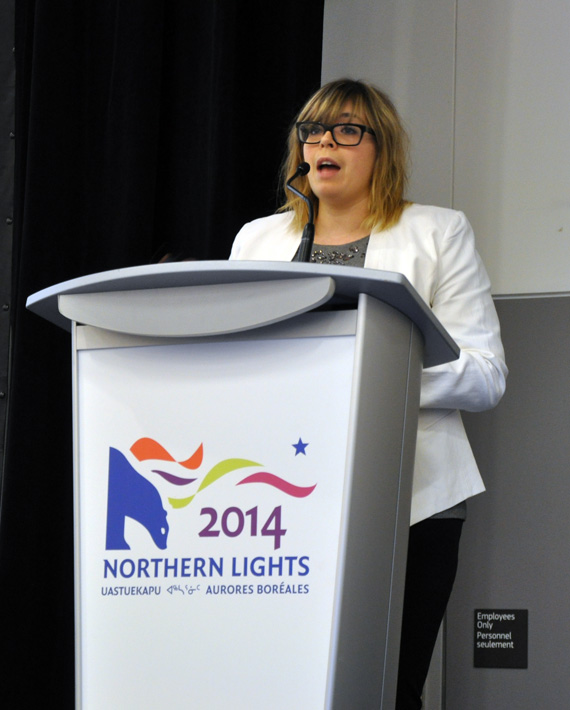 “We want to be in Nunavut for a long time,” said Agnico Eagle’s Krystel Mayrand. (PHOTO BY SARAH ROGERS)

OTTAWA — With its Meadowbank mine expected to produce nearly 400,000 ounces of gold this year, and its Meliadine project contemplated to go into production for the next two years, Agnico Eagle has a good reason to invest in Nunavut.

But the Canadian-based gold producer wants that investment to produce more than just gold — the mining company wants to create a local workforce.

Of the 800 people employed at Meadowbank outside of Baker Lake, 31 per cent are Inuit.

And even then, those Nunavummiut employees, who hail from nearby Kivalliq communities, haven’t come easily. The more than 200 Inuit workers at Meadowbank have been coaxed with training and support programs — efforts that Agnico Eagle and regional partners continue to build on.

“We want to be in Nunavut for a long time,” said Krystel Mayrand, who works in human resources for Agnico Eagle.

Mayrand spoke Jan. 30 at a Northern Lights trade shoe conference session called Opportunity in the North, which explored different approaches to skills and training development in remote and northern communities.

For now, most of Meadowbank’s workforce comes from Ontario and Quebec, but the mining company hopes that its Kivalliq-based support programs will change that over time.

And it’s not just about filling any jobs, Mayrand says, it’s getting Inuit into skilled jobs and management positions.

Currently, 40 per cent of Inuit employed at Meadowbank hold skilled jobs, she said, some of which they were promoted into.

“It’s almost impossible to hire Inuit professionals, and that’s directly linked to the level of education and successful graduation in Nunavut — especially in the Kivalliq region where we’re based,” Mayrand said.

Mayrand says that should not only increase the number of qualified Nunavummiut employees, but because it caters to staff location and schedules, Agnico Eagle can promote those employees faster than southern training programs could.

Agnico Eagle also offers a work readiness program, to prepare staff who are new to a mining environment and the fly-in, fly-out schedules that come with its Nunavut operations, along with an on-site literacy and numeracy skills program.

In addition, the mining company works with high schools in the Kivalliq region, doing outreach to students to help them understand what jobs are available in the industry and what training they’ll need to secure them.

One of the most noticeable impacts of these programs has been on Nunavummiut women, Mayrand said, who make up 32 per cent 0f Inuit employees at Meadowbank.

“Two years ago, we didn’t have any women in non-traditional jobs — they were mostly chefs, maids, dishwashers,” Mayrand said. “We decided we wanted to change that.”

Today, 20 women are employed at the mine as heavy equipment operators, including one who is an instructor.

Mayrand’s presentation tells the story of Alma Ikitilik, who went from being a janitor to a haul truck operator at Meadowbank in a matter of months.

Kenneth Kerr, the executive director of the Kivalliq Mine Training Society, admits that moving Inuit into the trades has been a “big challenge.”

Forty per cent of the society’s budget flows through to Agnico Eagle’s programs to attract and train Nunavummiut staff.

Kerr said the society is now working to develop a family support network for relatives of mine employees.

“It’s not just getting people hired, but helping the people who are on the other side of the fly-in, fly-out arrangement,” he said. “No one will stay on if it means that family falls apart.”

In 2011, Meadowbank’s turnover rate was 25 per cent, but Mayrand says its programs have helped grow more steady employment.

Agnico Eagle’s three Arctic-based projects represent about 56 per cent of the company’s assets, including its Meadowbank and Meliadine operations and the company’s Kittila mine in northern Finland.