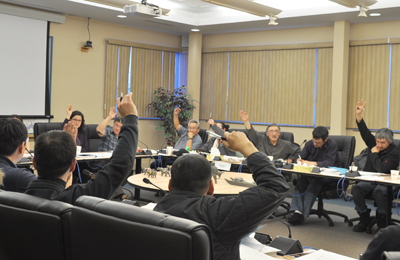 That includes $34 million in capital assets: most of that is money to pay for a major telecommunications upgrade in the region, including new satellite services that will triple the amount of bandwidth available to Nunavimmiut.

The KRG’s sustainable development department, which oversees employment and training services in the region, accounts for $24 million of the overall budget.

Nunavik’s regional government typically sees its budget approved in the December prior to the budget year.

But because the organization held an election of its regional council and executive members in late November, the budget is delayed by a few months, said the KRG’s outgoing director general, Isabelle Parizeau.

The 2016 budget registered a reserve surplus of $7.9 million; $3.2 million of which is dedicated to childcare infrastructure. The KRG oversees 19 childcare centres in the region’s 14 communities.

The KRG is funded through 40 separate agreements with the provincial and federal governments, including the Agreement concerning Block Funding for the KRG, or Sivunirmut Agreement.

The KRG’s budget does not cover educational, health or justice services in Nunavik, which are handled by the Kativik School Board, the Nunavik regional health board and the Quebec government.

Eli Angiyou, who is sitting in as interim councillor for Akulivik, raised the issue of remuneration for regular and executive council members, salaries that haven’t been increased for more than a decade.

The KRG has budgeted $1.6 million in 2016 to cover those salaries, which are determined by the provincial government.

The KRG has approached Quebec’s municipal affairs department to advocate for increased pay, but Parizeau said the change from a Liberal government to Parti Québécois and now another Liberal government has delayed the province’s response.

“It works out to about $100 a day,” Angiyou said of the amounts paid to councillors. “So I need to press you again.”