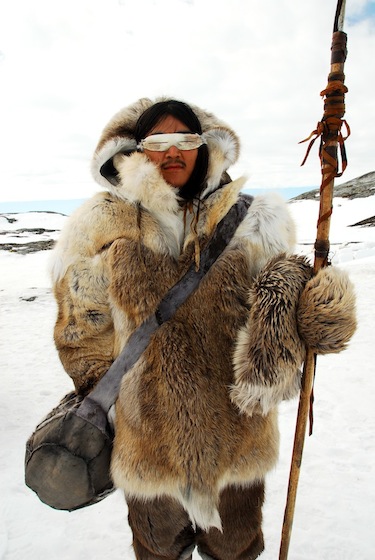 The big-screen Quebec film Maïna moved into production in Kuujjuaq last week, bringing Inuit, Innu, and Québécois together for the first time in film history.

Set centuries ago in northern Quebec, Maïna traces the love story between and Innu woman, Maïna, and an Inuk man, Natak.

Maïna starts with the aftermath of a bloody confrontation between the clan of Maïna, called the “Nearly Wolves,” and the “Men from the Land of Ice.”

Maïna, the Innu daughter of Grand Chief Mishtenapeu, then finds herself on a mission that will change the course of her life: she wants to keep a deathbed promise made to her friend Mastii, that she will retrieve Nipki, an 11-year-old boy captured by Inuit.

But on her quest, Maïna is taken captive by an Inuk leader called Natak and forced to travel with him back to the “Land of Ice.”

Planning the film’s segments in Longue-Pointe-de-Mingan, on Quebec’s north shore, and in Kuujjuaq, proved to be a cross-cultural experience that everyone involved in the film embraced, says producer Yves Fortin.

“We felt it was important to establish partnerships with both the Innu and Inuit communities to produce this film,” he said.

So the two cultures not only met in the film’s storyline, but they also came together during its making.

Producers convinced Makivvik Corp. and the Innu Council of Ekuanitshit (Mingan) to co-produce the film.

The film features well-known Inuit actors: Natak, is played by Ipellie Ootoova, who played Kanguq in The White Archer by John Houston.

Igloolik’s award-winning actor Natar Ungalaq, known for his roles in Atanarjuat:The Fast Runner and as Tiivi in The Necessities of Life, plays Tadlo, Natak’s father and the leader of his Inuit community.

Young Inuit actor Paul-Dylan Ivalu of Before Tomorrow also played a part in Maïna, as does Iqalummiut Mary Buscemi and her daughter Annie Neevee Buscemi.

Tulugarjuk’s four-year-old daughter Nuvvija played the daughter of Maïna and Natak, learning Innu to speak to her “mother” and speaking Inuktitut to her “father.”

Since the story is set in the Ungava region of Nunavik, the actors from Nunavut and the Northwest Territories had to learn new Inuktitut words and work on their pronunciation to reflect the local dialect.

Maïna will screen with the original Innu and Inuktitut dialogue, with subtitles.

In Maïna, characters grapple with the differences between Innu and Inuit as they both struggle for survival, and these differences are something that the crew say they wanted to understand before production could start.

“We didn’t want to just show up there to make a movie about them,” said director Michel Poulette. “We needed to take the time to exchange, get to know one another.”

Members of the crew spent more than a month in Kuujjuaq before the shooting started, scouting for set locations, building décors, gathering props, casting for extras, organizing transports and lodging.

Sled dog owner and musher Charlie Watt Jr. was hired to handle his dogs as “extras” in the movie, and to build igloos for the set in a traditional manner, along with snow expert Peter “Boy” Ittukallak of Puvirnituq.

Kuujjuaq seamstress Jessie Lemire was also consulted on the costumes.

And even before production started in Kuujjuaq, students in Alain Cloutier’s Independent Paths of Learning at Iguarsivik School in Puvirnituq made umiaks and kayaks for the film.

Inspired by the design of an 1885 Hudson Strait umiak pictured in the book, The Bark Canoes and Skin Boats of North America, the 25-foot umiaks they made for Maïna were as authentic as possible — although they were covered in canvas spray-painted to look like walrus or seal skins.

As for Nipki, one of the main characters in the movie, he’s played by a young Innu actor and piano virtuoso Uapeshkuss Thernish.

Although he usually plays First Nations roles, the star of APTN’s Blackstone, part-Inuk Eric Schweig, famous for his role in The Last of the Mohicans, also plays one of the main characters in Maïna, as Quujuuq, Natak’s friend.

For the segment shot in Kuujjuaq, trilingual Tunu Napartuk served as production assistant to avoid misunderstanding between the French-speaking crew and Inuit cast and to advise the directors so everything was done in the most genuine way possible.

Louisa Whiteley-Tukkiapik and Patricia York also helped dress the actors each day, to make sure the costumes were put on properly.

The week of shooting still had its challenges, the film crew had to deal with warmer weather than usual.

At one point, rain even threatened to destroy the set, but thanks to the magic of movie-making, a lot of hard work and a few extra hands from Jaanimmarik School’s IPL students, it all worked out.

When the igloos fell down due to the rain, the crew stuffed the igloos with milk crates and plywood boxes and filled the rest with snow, which they then carved to resemble igloos.

After a final day of shooting May 1, the cast and crew planned to head out to Quebec City to continue their work in the studio.