Kuujjuaq woman brings back symbol of the Inuit past

“How can you be proud of yourself when you don’t understand where you came from?” 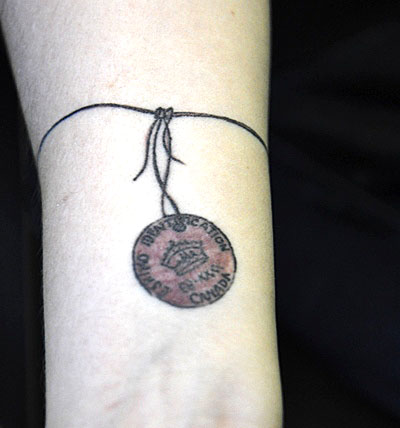 Similar to the original, Duncan’s disc reads Eskimo Identification Canada, E8-XXXX. The E8 denotes the Ungava region, which would normally be followed by a four-digit identification number. (PHOTO BY SARAH ROGERS) 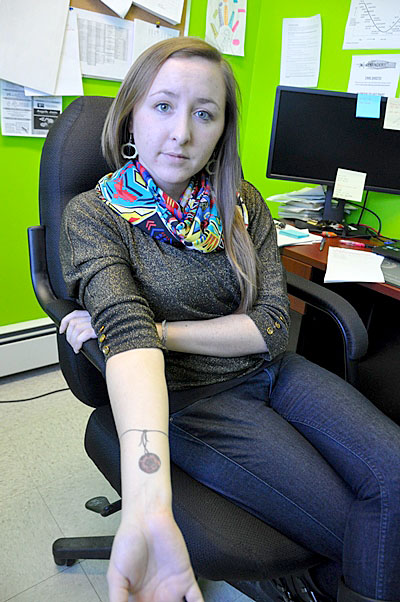 Kuujjuaq woman Olivia Ikey Duncan shows off her new tattoo, a depiction of the Eskimo identification discs issued to Canadian Inuit in the 1940s. (PHOTO BY SARAH ROGERS)

KUUJJUAQ — The Eskimo identification discs once used by the Canadian government to track Inuit faded in the early 1970s as Inuit across the country adopted surnames.

But a young Nunavik woman has revived that symbol to tell a part of her history.

The inside of Olivia Ikey Duncan’s right arm tells a story about her family’s past: that’s where she bears a tattoo of the coin-shaped disc, held in place by a thinly-inked string.

“I always wanted a tattoo,” said Duncan, 24. “But I didn’t want a butterfly or a star, and I wanted it to say something about who I am.”

Earlier this year, Duncan, who lives in Kuujjuaq, where she works for the Kativik Regional Government, attended a reconciliation workshop for Aboriginal youth in Toronto. There, she learned about how Inuit and other groups were colonized.

“I cried so much that day — I couldn’t believe that my people had gone through that and survived,” she said. “How they were categorized, and how they were treated… that’s when I said ‘that’s my tattoo.’”

Similar to the original, Duncan’s disc reads Eskimo Identification Canada, E8-XXXX. The E8 denotes the Ungava region, which would normally be followed by a four-digit identification number.

Duncan said she’s only ever seen photographs of the discs, although both her grandmother and father used them until the early 1980s.

“I’ve talked to family members who told me how their cheques used to come in addressed to their disc numbers,” she said.

Before she decided on her tattoo, Duncan researched the history of the tags, and how Inuit were administered — a history she wishes was more available to Inuit youth today.

Duncan learned that the first changes to Inuit names happened in the 20th century with the arrival of missionaries to the Canadian Arctic.

They encouraged Inuit to take biblical names, which they did, adopting qallunaat names modified for easier use in the Inuktitut language, like Siasi (Jessie) or Joanasie (John).

But with the spread of trade and administration across the North in the early part of the 1900s, there were calls to better identify “Eskimos,” for the administration of federal programs and to compile census data.

According to a brief history of Eskimo identification, prepared for the Department of Indian and Northern Affairs in 1975, civil servants posted in the Canadian Arctic first tried to fingerprint Inuit.

After failed attempts, Dr. A.G. MacKinnon, a medical officer posted in Pangnirtung, wrote to the federal government in 1935 to suggest that Inuit be assigned identification discs, to be worn at all times.

It took years and more demands for identification systems until the disc idea was approved and implemented in the early 1940s.

The original discs were made of leather and often sewn into a jacket or worn as a necklace.

They were used until 1971, when the Government of the Northwest Territories launched Project Surname to encourage Inuit to adopt family names.

But because the region was separately administered, the use of the discs continued in Nunavik until the early 1980s.

For Duncan, that part of her family’s history seems so close — yet so far away for a generation, like hers, who grew up without them.

“A lot of people threw [the discs] out after they started creating last names,” she said. “They were supposed to send them back to the federal government after someone was deceased, so a lot don’t have them anymore.”

“But people are trying to understand now and they want their discs back, to keep as a part of our history,” she added.

While the identification discs represent what many see as a dark part of Inuit history, Duncan said she believes that civil servants who issued the discs had good intentions.

“From the government’s perspective, it wasn’t to treat us like dogs,” she said. “It wasn’t meant to be mean to Inuit, it was to help us administer ourselves.”

But that government program — and many others — give Duncan reason to dig deeper to learn more about her own family’s colonization.

“How can you be proud of yourself when you don’t understand where you came from?”