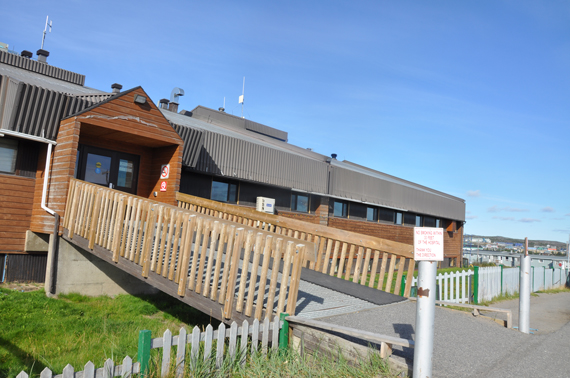 The Kuujjuaq-based Tulattavik health centre, which services communities all along the Ungava coast, was unable to balance its budget for the fiscal year that ended March 31, 2014, resulting in an accumulated deficit of $6.8 million. (PHOTO COURTESY OF NV OF KUUJJUAQ)

Nunavik’s Tulattavik Health Centre must make major spending cuts to reduce an annual deficit of more than $6 million, the Nunavik Regional Board of Health and Social Services said May 29.

The Kuujjuaq-based hospital, which serves communities all along the Ungava coast, was unable to balance its budget for the fiscal year that ended March 31, 2014.

As required by a Quebec law requiring balanced budgets within its public health and social services network, Tulattavik has to take steps towards a fiscal balance.

In a May 29 news release, the NRBHSS said the health centre’s administration is planning to take measures to reduce its expenses that include: the abolition of vacant positions; reduction of overtime hours; cuts in administrative and travel expenses; and negotiations on the costs of user transportation.

But hospital administrators said those measures will not interfere with patient services, or increase the workload of Tulattavik’s staff.

Tulattavik’s executive director, Madge Pomerleau, said she has already met with management and union representations to explain the measures.

The long-term solution to the hospital’s deficit is better resource management for the region, Pomerleau said.

The chair of Tulattavik’s board of directors, Claude Gadbois, said all efforts will be made to reduce administrative and management costs, noting the importance of “immediately establishing measures to stabilize the institution’s functioning for the future.”