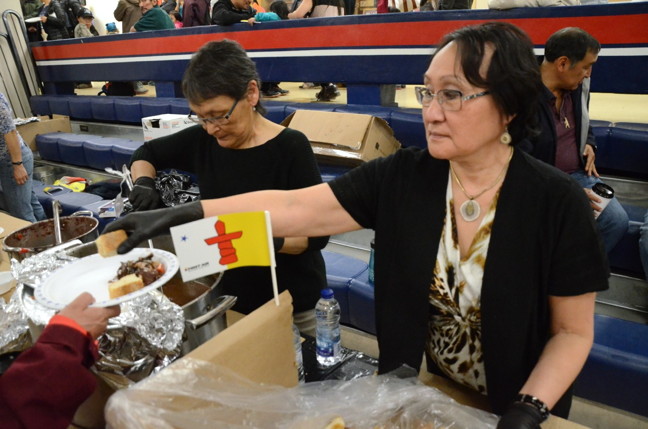 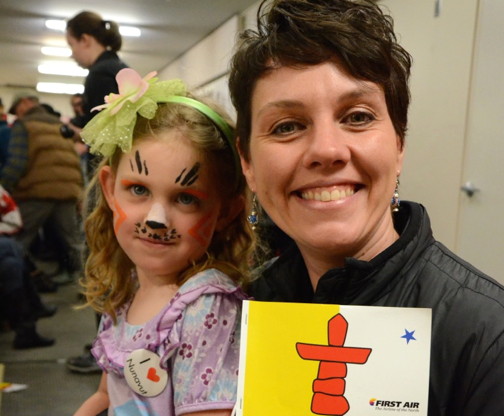 Deatra Walsh holds the Nunavut flag in one hand and her four-year-old face-painted daughter, Drew Manning, in the other at Inuksuk High School July 9. 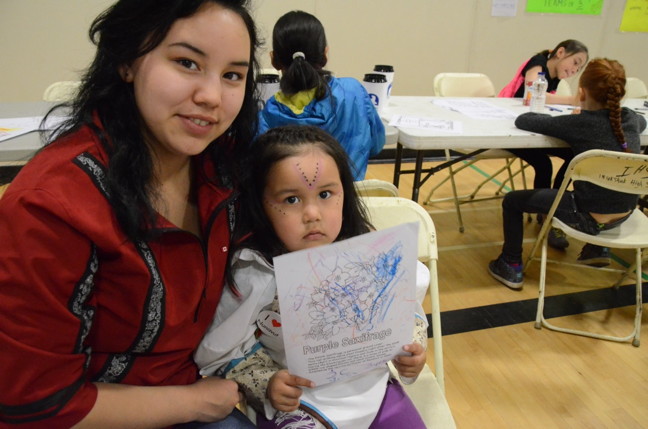 Three-year-old Tuuta Aliyak shows off her artwork with her mother Kutsiq Aliyak at Inuksuk High School July 9. (ALL PHOTOS BY DAVID MURPHY)

On the territory’s 22nd Nunavut Day, the rain forced hordes of people inside Inuksuk High School for festivities in Iqaluit July 9.

“Although the weather is not co-operating, our cheer and happiness is. Right?” Nunavut’s deputy premier Monica Ell asked a crowd of about 100 people in the school’s gymnasium.

Nunavut Day marks the proclamation into law of the Nunavut Land Claims Agreement on July 9, 1993.

But the sun wasn’t the only no show this Nunavut Day.

The seal skinning competition, a staple for the July 9 holiday, was cancelled because of the poor ice conditions in Frobisher Bay, meaning hunters couldn’t catch any seal.

But there was a bright spot on holiday Thursday: Nunavut regained a part of its history.

At a ceremony at the legislative assembly earlier on Nunavut Day, former Indian Affairs Minister Tom Siddon returned a valuable carving given to him in 1990 by Paul Quassa, then the Tungavik Federation of Nunavut’s chief negotiator on the NCLA.

Siddon was given Jake Kadluk’s snow block carving for helping to negotiate the Nunavut Land Claims Agreement-in-Principle, which was signed April 30, 1990 in Igloolik.

And yesterday was the former civil servant’s first time back in Nunavut since the land claims agreement was signed on May 25, 1993.

It all came full circle, in fact. The 1993 agreement was signed at Inuksuk High School, where Quassa led Siddon and his wife around for some traditional food this Nunavut Day.

The repatriated snow block carving was collecting dust in his house, and it was time to give it back, Siddon told Nunatsiaq News.

“It shows an Inuit carver carving three blocks, creating the beginnings of an iglu. And I think we both agree that that is symbolic of the building of Nunavut,” Siddon said, gesturing to Paul Quassa.

“In the three years [between 1990 and 1993], that carving sat in my office in Ottawa and reminded me every morning — I was faced with this carving, so beautiful, a gift, that’s so symbolic of what the job was — that I had to finish,” he said.

But for 22 years — after Siddon, Quassa and former Prime Minister Brian Mulroney signed the 1993 agreement — the carving relocated to his home and reminded Siddon of his experience helping to carve out a brand new territory.

“But to the people of Nunavut, it’s so much more than an experience. Because it’s symbolic. That’s why we decided it was time to bring it back home,” Siddon said.

The snow block carving is on display at the legislative assembly “until Nunavut has its own heritage centre” said a joint July 9 NTI and Government of Nunavut press release.

Quassa said his vision for Nunavut back in 1990 is still on course.

“Our vision when we were negotiating and signing the agreement-in-principal was to have a Nunavut where our language is totally being used on daily basis. Inuit Qaujimajatuqangit is being respected. And our Inuit youth are having a good strong education and being part of growing our Nunavut,” Quassa said.

“And this is what we see today.”

“We’ve gone a long way from where Nunavut originally came from. We always need to look back to know where we’re going,” Akeeagok said.

“It’s as if the torch has been passed onto the next generation in terms of where we go from here. To ensure that the land claims is fully implemented to it’s fullest potential.”

Akeeagok pointed out there’s more Inuit attending post secondary school and there are more nurses and teachers — a good sign for the young territory.

“We’re definitely going in the right path. There’s obviously going to be challenges along the way, but that’s what makes you stronger,” Akeeagok said.

“As Inuit, we’ve never tackled anything individually. And that’s the beauty of this culture, how it’s persevered in changing the map of Canada.”

Other than politicos giving speeches and patting themselves on the back, most Iqalungmiut packed the gymnasium for a performance from the Iqaluit-based Arctic soul band, The Trade Offs.

If you wanted one of thousands of free hotdogs and hamburgers on offer, you’d have to wait a while. Ditto for the Beavertail line. Even in rainy, cold weather, the popular deep fried, Ottawa-based pastry kiosk drew crowds outside of the high school.

Later on, the Astro Theatre hosted an Inuktitut Film Festival including the premiere of the Frozen Planet series in Inuktitut. 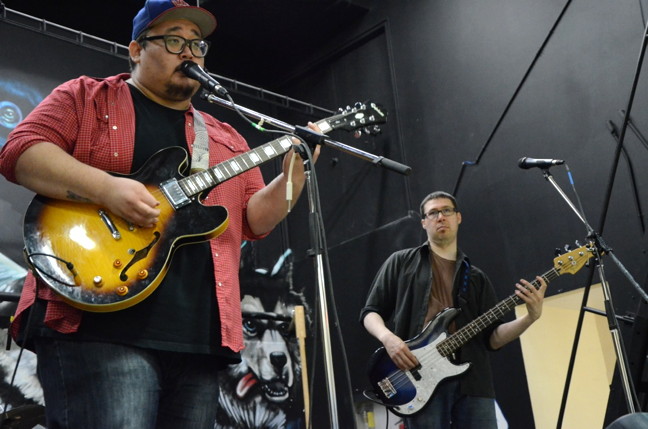 The Trade Offs play for a packed house inside the Inuksuk High School gymnasium July 9.