Kimberly Tolognak, 37, receptionist and dispatcher for Larga Edmonton. Originally from Cambridge Bay, Tolognak has spent eight years in Edmonton, but still loves working with people from the North. (PHOTO BY ANGELA BRUNSCHOT) Rosie Evetalegak enjoys a quiet moment while her infant grandson Cody Evetalegak naps on the couch in the common room of Larga Edmonton. (PHOTO BY ANGELA BRUNSCHOT) Rosie Evetalegak, 42, holds her one-month-old grandson Cody Evetalegak, alongside her daughter Dana, 17, all from Cambridge Bay. (PHOTO BY ANGELA BRUNSCHOT) 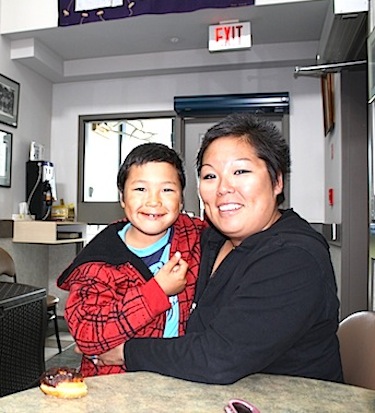 On this sunny afternoon, Ilgok stands in the common room of the patient boarding home as he waits for his mother to take him to a nearby park.

Then, he wanders out to the backyard common fire-pit area and between the two buildings.

Residents and staff alike greet him, and the cheerful boy seems as much at home here as he would be with his own family in Kugluktuk.

Blake Ilgok and his mom, Donna Ilgok, 31, visit Larga Edmonton once a year. Her son suffered a stroke as a baby, and, as a result, now he comes to Edmonton for physiotherapy to increase movement in his left hand and foot and for brace fittings.

The two have stayed in hotels before, but Donna Ilgok says she found that option far too quiet and isolated for her social butterfly.

“It’s a good stay,” she says with a smile. “My son knows Larga inside and out.”

Larga Edmonton began 24 years ago to provide just that kind of “home away from home,” for people living in the Northwest Territories, who needed medical attention in Edmonton.

Starting with only 12 beds, Larga Edmonton now has grown to 58 beds spread over two buildings, built thanks to a partnership between the Kitikmeot Corp., the Nunasi Corp. and the Gwich’in Development Corp..

The complex at 10723 111 Ave., built in 2000, managed by Nunasi Corp., remains the only one of the Larga patient homes that takes in Inuit from Nunavut as well as First Nations and non-status residents of the NWT.

Larga Edmonton looks after transportation, lodging and meals for its residents — and the Northern Health Services Network looks after everything else.

“They are made to feel as if they are coming in to see family, not just have some medical appointments,” says Michele Brassard, a nurse and the general manager of the facility, who took over the job from Bill Davidson in 2010.

Although Brassard isn’t from Nunavut or the NWT herself, she hires people with northern experience whenever possible. About 50 per cent of her staff have spent time in the North or are from the North.

That includes Larga Edmonton receptionist and dispatcher Kimberly Tologanak, 37, who grew up in Cambridge Bay. She spent eight years living in Edmonton before taking her current job, but she still feels more comfortable working with people from the North.

Tologanak knows the slang and recognizes the hand gestures, and “here, I know how to say everybody’s last name,” she says.

Sourcing caribou has presented a challenge over the last year, but Brassard has been able keep up the northern menu by buying char directly from northern communities.

Like the other Larga homes located in Yellowknife, Winnipeg and Ottawa, the Edmonton location has a zero tolerance policy for drugs and alcohol.

The majority of residents respect that rule, says Brassard, and bans are extremely rare. Although the house is not far from downtown Edmonton bars, she says she doesn’t see any increased temptation.

They also hand out Tim Horton’s coffee cards to those who may need some time for themselves.

Larga Edmonton continues to struggle with overcrowding. From Jan. 1 to June 29 of this year, 261 clients from Larga Edmonton stayed in hotels, with stays ranging from one to 22 days.

In addition to the young women who come in for their high-risk pregnancies, she’s also seeing more elderly people with complicated health concerns that require longer stays.

The usual stay used to be five to 10 days, but has now increased to two weeks. Some stays last up to three months.

There are plans in the works to deal with overcrowding. A possible third building on an adjacent vacant lot is under consideration, but those changes are still far in the future.

When overcrowding does occur, Brassard prefers to house people at the nearby Chateau Louis hotel, close enough for them to return to Larga for meals and social support.

Family and friends who accompany patients to Edmonton are expected to stay with hospitalized patients during the day, as well as accompany them to all doctor’s appointments.

Larga Edmonton does not provide medical care, so escorts are expected to help with personal care and communication with doctors.

Although she hasn’t kept specific stats, Brassard says she is seeing many clients now coming down without an escort.

The 17-year-old came to Edmonton from Cambridge Bay for the birth of her son Cody. He was born with two club feet, and required casts on both legs.

The infant now sleeps with his grandmother, and Dana and Rosie take turns caring for him through out the day.

For her part, Evetalegak appreciates the northern comforts that Larga offers. The reserved 42-year old grandmother is cheered by the appearance of caribou on the menu, and she especially enjoys the camaraderie provided by her fellow northerners at Larga.

“It’s like a family,” she says softly as one-month-old Cody sleeps on her back. The people here are “more feeling.”