“Why is it unreasonable to seek and to advance our constitutional rights?” 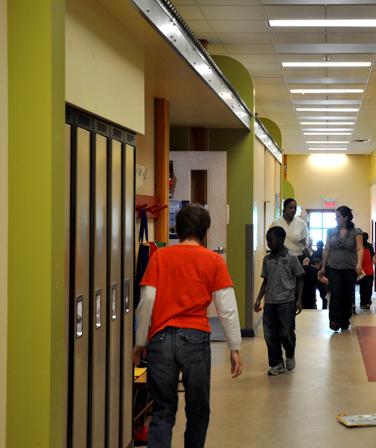 A lawsuit against the Government of Nunavut is seeking more facilities, staff and overall autonomy for the territory’s only French-language school, École des Trois-Soleils in Iqaluit. (FILE PHOTO)

Reading between the lines of the 25-page lawsuit that Nunavut’s French-language school board just launched against the Government of Nunavut, Doug Garson thinks of his daughters.

The girls are Grade 7 and Grade 10 students at Iqaluit’s École des Trois-Soleils, Nunavut’s only French-language school, which opened its doors in 2004.

Garson’s family is a bilingual one — French- and English-speaking — but with the prominence of English everywhere in the country outside Quebec, Garson wanted his children to gain a strong grasp of French.

That’s what a French-language education should be giving them, Garson said. But it’s not.

He’s hoping the lawsuit, filed Feb. 11, can fill in the funding gaps that he believes currently put French students at a disadvantage.

Because Trois-Soleils is so small is size and population (90 students in all,) its high school students — his eldest daughter included — go to classes based out of nearby Inuksuk High School.

Although it’s technically a Trois-Soleils curriculum, only about 40 per cent of classes in its Grade 10 to Grade 12 program are offered in French.

“If you, as a high school student, want to enjoy a French-language education, you have to be in a totally French environment, where French is spoken in the hallways,” said Garson, an Iqaluit-based lawyer.

“If you don’t offer the 100 per cent program, what happens when they start to move through the system?”

They leave the French program, Garson said, answering his own question.

And that’s already one of the school’s major challenges, he said. It’s one of the reasons that, along with Commission scolaire francophone du Nunavut (CSFN), Garson has filed a legal challenge against the Government of Nunavut, demanding it offer French-language education and school facilities on par with Iqaluit’s other schools, where English is the dominant language.

The lawsuit calls on the GN to live up to obligations under Section 23 of the Canadian Charter of Rights and Freedoms.

That’s the section that guarantees minority language educational rights to French-speaking communities outside of Quebec, in order to help those communities preserve their language.

“Without a strong and efficient secondary program, assimilation is practically inevitable,” reads the lawsuit, filed in French.

But it’s not just about going after the GN to guarantee a French-language high school program; the lawsuit wants four new classrooms for its primary section; a science and computer lab, home economics room, an arts room and its own gymnasium.

The document says that an expansion to the current school would be a “reasonable and viable option” for housing those new facilities.

“Students at Trois-Soleils have to trudge by foot all year to nearby Aqsarniit [middle school] to use their gymnasium,” Garson said, “and access to it is subject to the needs of that school.”

The CSFN has to negotiate the use of other school spaces on a regular basis to maintain its programming, the lawsuit contends — programming which is never guaranteed.

The lawsuit also asks the GN’s department of education for funding to hire more personnel, including three more teachers, a vice-principal and a full-time secretary.

Nunavut’s Education Act gives the CSFN “exclusive decision-making power” in the delivery of French-language education, including the hiring and appointment of administrative and teaching staff, control of its budgets and establishing its own curriculum, the lawsuit said.

While the GN’s education department has “certain discretions and powers” over the school board, it can never be to the detriment of the linguistic and cultural needs of the francophone community, it said.

The lawsuit comes in the midst of a very public dispute between the school board and parents of children enrolled at Trois-Soleils, who have accused the board of mismanagement and a lack of transparency.

Garson notes that the rift has also created bad feelings among some Nunavummiut, who feel that students at Trois-Soleils are already a privileged group.

“We know that we have the best educational outcomes in the territory — I think the school does an excellent job,” Garson said. “But that’s not a valid argument. We still don’t have many of the things other schools have.”

As far as Garson is concerned, the lawsuit has nothing to do with the grievances put forward by the school’s parent group, the Association des parents francophones du Nunavut.

That group publicly distanced itself from the lawsuit earlier this week, calling on the CSFN to “cease all legal intimidation and bullying.”

Garson said, in his experience, a minority language group denouncing efforts to have a government recognize its rights is “unprecedented.”

“Why is it unreasonable to seek and to advance our constitutional rights?” he said.

“It’s my belief that as a francophone parent and a member of the francophone community in Nunavut, that it was my duty,” Garson added.

“My eldest will probably be graduated by the time anything comes of this.”