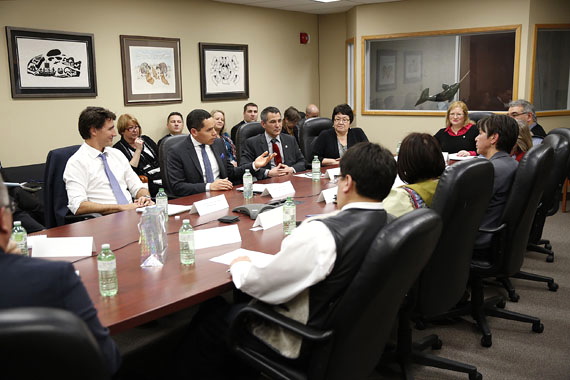 Prime Minister Justin Trudeau discusses a new Inuit-to-Crown relationship with Natan Obed, the president of Inuit Tapiriit Kanatami, and other Inuit leaders at ITK’s offices in January 2016, almost exactly one year ago today. The national Inuit body is now calling on the Trudeau government to fulfill its promise to entrench the UN Declaration on the Rights of Indigenous Peoples in Canadian law. (PHOTO BY ADAM SCOTTI/PMO)

The body that represents Canada’s 50,000 or so Inuit is telling the Justin Trudeau government to quit paying lip service and get to work entrenching Aboriginal rights into Canadian law.

In a position paper called “Implementing the UN Declaration on the Rights of Indigenous Peoples in Canada,” released Jan. 24, the Inuit Tapiriit Kanatami says Trudeau and Indigenous and Northern Affairs Minister Carolyn Bennett have not lived up to their promise to entrench those international rights in Canada.

“It has been more than a year since the prime minister promised to renew Canada’s relationship with Indigenous peoples, including specific direction to the minister of Indigenous and Northern Affairs to prioritize implementing the UN Declaration. However, Canada’s work to date on this file can best be characterized as inaction,” said ITK President Natan Obed, in a Jan. 24 news release.

Instead, ITK argues, the government is suggesting that Section 35 of the Canadian Constitution, along with modern treaties and land claim agreements, mirror the United Nations declaration and already entrench those rights here in Canada.

Not quite, says ITK.

Section 35 of the Constitution affirms Aboriginal rights in Canada, including those detailed in treaties and land claims, but does not specifically define them.

That’s why ITK, and other Aboriginal organizations, have pushed for greater certainty and clarification of their peoples’ rights within the Constitution, and other Canadian laws.

The the UN Declaration on the Rights of Indigenous Peoples in Canada or UNDRIP is significant for Aboriginal peoples because it “affirms rights that may not be explicitly affirmed or clarified within existing treaty rights or emerging case law,” the paper says.

In other words, the UNDRIP goes much further than any Canadian law in defining Indigenous rights so if Canada is upholding UNDRIP, it has to make some changes at home.

For example, says ITK, the UNDRIP calls for “free, prior and informed consent” when governments make decisions that impact Aboriginal peoples’ rights to use their land, speak their language and express their culture.

Minister of Justice and Attorney General of Canada, Jody Wilson-Raybould, characterizes this UN right to consent as a “concept” in her July 2016 letter to Grand Chief Matthew Coon Come of the Grand Council of the Crees, ITK says in it’s position paper, “rather than as a positive human right of Inuit, Métis and First Nations that must be incorporated into the laws, policies and procedures of the federal government.”

That letter to Coon Come talks about “meaningful and systemic change,” but it needs to be reinforced with more than just rhetoric, ITK says.

In addition, when Wilson-Raybould tells Coon Come there is a need for “careful consideration” on these matters, she does not say the dialogue must begin with Indigenous peoples, nation to nation.

The UNDRIP affirms rights of Indigenous peoples to “establish and control their educational systems and institutions providing education in their own language, in a manner appropriate to their cultural methods of teaching and learning.”

Inuit are already doing this even though those rights are not defined in the Constitution or their land claims, the paper states; there must be a “procedural mechanism” that Inuit can use to ensure these human rights are upheld at the territorial and provincial levels.

The paper concludes by saying ITK is committed to collaborating and partnering with the federal government to help Trudeau and bennett achieve his commitments.

To that end, ITK offers four recommendations to:

• develop new federal laws, in partnership with Inuit, that create a legal rights framework to adopt and implement UNDRIP;

• work with Inuit to develop a clearly defined apparatus to implement UNDRIP at the provincial and territorial levels;

• “reject colonialism in favour of a contemporary human-rights-based approach” and start with upholding the Inuit right to free and prior informed consent; and,

• adopt the UNDRIP as the framework for reconciliation between Aboriginal peoples and the Crown, as stated in the Truth and Reconciliation’s Calls to Action.

We contacted Indigenous and Northern Affairs Canada for their reaction to ITK’s position paper and their public affairs team said the Department of Justice is now leading the UNDRIP file.

We did not hear back from the justice department by our publication time.