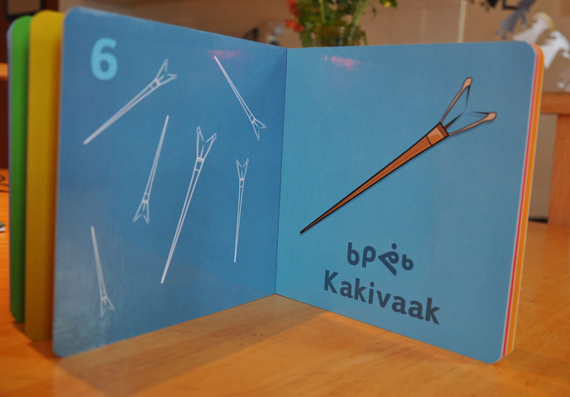 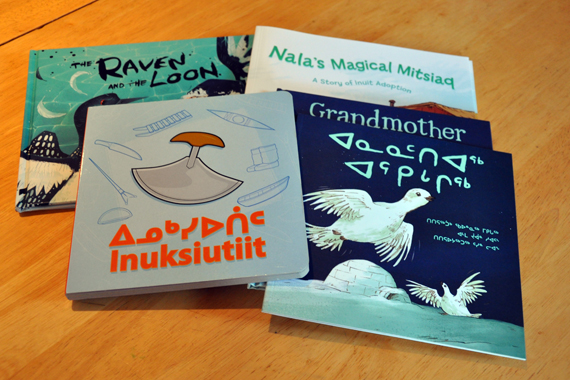 These are just a few of the children’s books Inhabit Media published in 2013. (PHOTO BY SARAH ROGERS)

Each year the Iqaluit-based Inhabit Media publishing house adds to its offering of traditional Inuit stories, told by modern voices and packaged alongside vivid illustrations.

As the holidays draw near, here is a selection of some of Inhabit Media’s newest children’s publications from 2013 that make for good gifts or reading over the holiday break:

The eight-page book dedicates its small pages to Inuit terms like the qajaq, qulliq or ulu, illustrated and spelled out in large-font Inuktitut syllabics and Roman characters. Each page in Inuksiutiit counts from one to eight, showing that number of objects on each page.

When he repeatedly asks his grandmother to tell him a story, she gives in, telling him a frightening story he’ll never forgot.

Grandmother Ptarmigan was written by Joanne Schwartz, who collaborated with Mikkigak, who is known locally for her storytelling. The pair also worked together to produce Inhabit Media’s Legend of the Fog and our Corner Grocery Store.

The picture book version of the story is illustrated by Toronto artist Qin Leng.

• In the Raven and the Loon, a raven flies into loon’s igloo one day and won’t let her sew in peace.

Finally, the birds decide to make new coats for each other, although it leads to a feud. The story explains, why, to this day, ravens have black feathers and loons have flat feet.

The story was written by Rachel and Sean Qitsualik-Tinsley, who also worked together on Inhabit’s collection of Inuit mythology called Ajjiit: Dark Dreams of the Ancient Arctic.

Young readers will enjoy following the tiff between the two animals in The Raven and the Loon, enhanced by the expressive illustrations, done by Kim Smith.

• Nala’s Magical Mitsiaq: A story of Inuit adoption is an important addition to Inhabit Media’s offerings.

The story shares a story of Inuit custom adoption, told through the words of first-time author and adoptive mother Jennifer Noah.

In Nala’s Magical Mitsiaq, a mother has two daughters, one who she gave birth to the story and another who she adopted.

One day during a blizzard, the family stays in their Iqaluit home while the mother tells the girls the stories of where they came from.

The story introduces readers to Inuit custom adoption and the importance of the practice in Inuit culture.

“Nala’s Mystical Mitsiaq was written was written because I wanted to be able to read a children’s book to my panic to which she could relate,” writes the author in the book’s epilogue. “I also wrote the story so that children who have been adopted from Nunavut to other parts of Canada will know how amazing the journey they took to find their families was, and to show those children how revered and celebrated the practice of adoption is among Inuit.”

The book also includes a glossary of Inuktitut terms such as mitsiaq (umbilical cord) or tiguarniq (the act of adopting.)

And finally, this book hears from other Inuit adoptive mothers about their own experiences.

The book’s two characters, Qiatsuk and Nala are named after Qiatsuk Noah and Nala Alainga, who together helped the Canadian government legally recognize the practice of Inuit custom adoption in 1960.

The titles are available in both Inuktitut and English at Arctic Ventures in Iqaluit or online by visiting Inhabit Media.