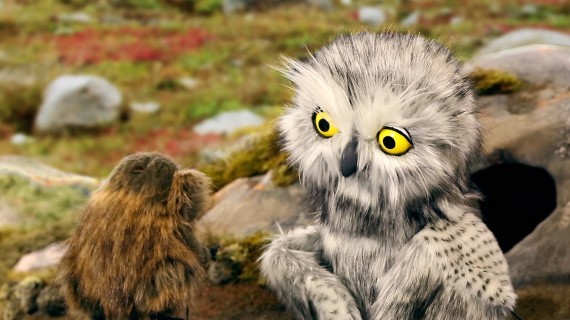 This owl loses his dinner when a trickster lemming escapes by his wit. (PHOTO COURTESY OF ROSELYNN AKULUKJUK)

Pack up your popcorn and pitsi. There’s a film fest in Iqaluit today.

The show starts at 1 p.m. It’s free, and open to everyone.

“There are not a lot of children’s films that are in Inuktitut, that are accessible to Inuit in Nunavut,” said film director Roselynn Akulukjuk of Taqqut Productions. “It could be really fun for them to see films in their own language that are in the Arctic.”

She said the films tell traditional folktales and Inuit mythology: “the type of stories that are told by elders.”

Akulukjuk’s 2016 film, titled The Owl and the Lemming, was named best animation at the American Indian Film Festival last year.

The film, which was later adapted into a book by Inhabit Media, features an arrogant young owl and a smart little lemming who tricks the owl into letting it go free.

But the film fest doesn’t end in Iqaluit.

“We wanted to include all of Nunavut,” Akulukjuk said.

A DVD festival pack with colouring sheets, film-character stickers and voting cards to let viewers to choose their favourite films will be sent to every elementary school in Nunavut.

“Participating schools are encouraged to make the event as much like a movie theatre experience as possible,” the Nunavut Bilingual Education Society said in an information bulletin.

“We hope that by seeing Inuit language and culture showcased in film, children might be encouraged to become storytellers or filmmakers themselves.”

Schools looking for more information to host their own film festivals can email Akulukjuk at rose@taqqut.com.