“People are generally surprised that there are insects in the Arctic” 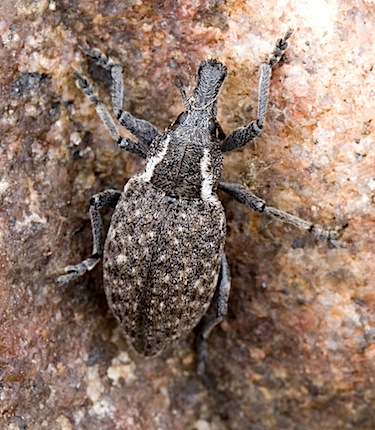 This species of beetle, known as the weevil, can be easily found by overturning rocks in southern Nunavut in late May. (PHOTO BY CAROLYN MALLORY) The brush-footed butterfly is one of 32 species of tundra-adapted butterflies found around Nunavut – seven of which survive on the High Arctic islands. (PHOTO BY CAROLYN MALLORY) 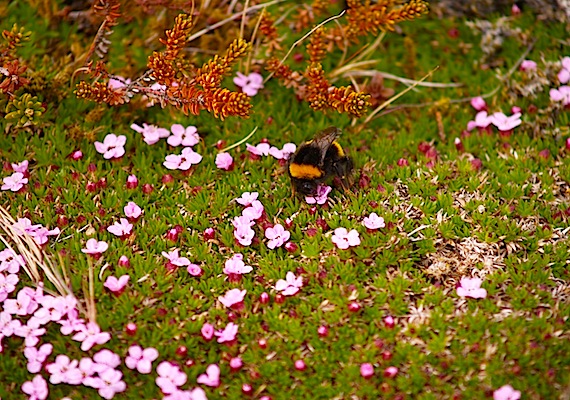 Pictured here buzzing on the tundra is a bumblebee, known as iguttaq or igutsaq in Inuktitut, the most common of the bee species found in Nunavut. The territory is home to almost a dozen species of bumblebees. (PHOTO BY CAROLYN MALLORY)

They’re not the iconic sea mammals, like seals or polar bears, that most people associate with the Arctic.

But insects — and not just mosquitos and black flies — are plentiful across Nunavut and play an important role in the Arctic ecosystem.

They’re also the focus of a colourful new guidebook called Common Insects of Nunavut, by writer Carolyn Mallory, a former resident of Iqaluit.

Take the best-known — and possibly least-loved — of them: the mosquito.

There are some 25 species of mosquito covering the territory, including two known species that inhabit the High Arctic.

But Mallory found that the mosquito has had some enduring qualities in recent history; a July 2006 interview with Kugluktuk elder Joseph Niptanatiak revealed the insects used to help hunters use their bow and arrows to kill caribou.

“When the bugs were swarming around the caribou, the caribou would run and get close to the hunters, close enough to [shoot them with] bow and arrows,” he said.

The largest of Nunavut’s insect species is probably the crane fly, called sulutuq or tuktuujaq in Inuktitut, which means “resembles a caribou.”

The latter name is thought to be because of the crane’s long legs; Arctic species of the fly can measure up to 60 millimetres in length.

But it’s the beetle, of which there are about 80 species in Nunavut, that rank among Mallory’s favourite creepy crawlies.

Mallory points to the weevil variety, which can be easily found by overturning rocks in southern Nunavut communities in late May.

The insects, which about the size of a thumbnail, are coloured like rocks and will play dead once discovered.

In Nunavut, there is limited habitat for insects compared to areas in the South, Mallory explains in her book. Arctic bugs often stick to the tundra, since they rely on plants and ponds to survive.

While most insects are cold-blooded, Arctic insects have developed something called cold-hardiness, which allows them to survive through the winter being frozen.

Some species can live in temperatures up to -60 C using glycerol, an internal anti-freeze, to protect their tissues from freezing, Mallory said.

Arctic insects have also adapted to the cold by sporting darker and hairier bodies, and hiding inside plants to stay warm.

But Mallory, who calls herself a writer, not a scientist, admits there is much more to learn about northern insects.

“It’s really difficult to find information and much of the fauna has yet to be discovered,” she said.

In the South, insect research is often fueled by forestry and agriculture, which is largely absent in Nunavut.

And although her book documents stories from elders, Mallory says she expected to hear more about how insects impacted traditional Inuit life on the land.

“It’s much easier with plant species, because they have medicinal purposes,” said Mallory, who recently moved to Nova Scotia after living in Iqaluit for 12 years.

“But I did find so many kinds of flies that I didn’t know about, helping make the North more beautiful with flowers.”

Plants and flowers were one of the inspirations and major links to Mallory’s latest project, following her 2004 book Common Plants of Nunavut.

Studying plants on the tundra brought Mallory into direct contact with many of the territory’s insects, when she discovered the species pollinating or hiding in plants to keep warm.

Her curiosity led to her to one of the few sources of information on Arctic insects, a two-week field course in Churchill, Manitoba, taught by biologists Peter Kevan and the late Rob Roughley.

Both researchers offered their expertise to the book, she said.

Now the Government of Nunavut’s education department has published Mallory’s glossy, 172-page guide in both English and Inuktitut.

A commercial version of the book will be available at Arctic Ventures in Iqaluit and through online Canadian booksellers like Chapters and Amazon in June.