Lots of holes in the Law of the Sea: legal expert

“A lot more law…will need to be built” 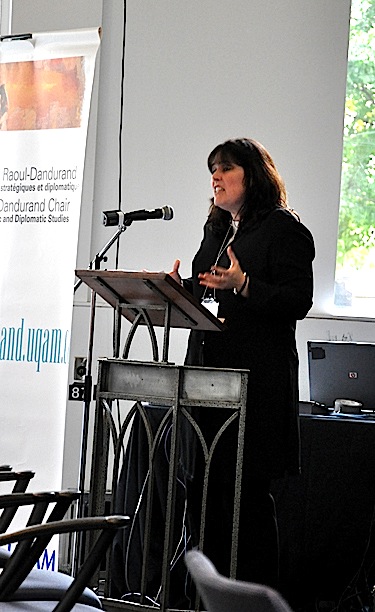 And Canada should stop acting as if it does, says Suzanne Lalonde, Université de Montréal professor of international law, who called the framework “soft” Oct. 3 at a Montreal conference called “Arctic in Transition.”

“If we are to manage these new opportunities and challenges, there is a lot more law that will need to be built,” Lalonde said. “But there’s a lot more to be done, on issues that are a lot more sensitive than search and rescue.”

At stake is control over the potentially huge oil, natural gas, and mineral reserves believed to lie under the Arctic Ocean.

Only the United Nations Convention on the law of the sea, usually called by its acronym UNCLOS, provides the basis for the settlement of disputes over those waters.

“The idea seems to be that it will lead to peaceful resolution,” Lalonde said.

Under UNCLOS, nations with Arctic Ocean coastlines — like Canada, Russia, the United States, Denmark and Norway — can claim offshore territory beyond 200-nautical mile limited if they can prove by 2013 that underwater geology shows the seabed is actually an extension of their land base, the continental shelf.

Although this approach may have worked so far, Lalonde said measurements of where the continental shelf begins and ends can vary.

And this could potentially lead to conflict.

Canada also stands behind Article 234 of the UNCLOS convention, which gives nations the right to adopt and enforce laws on “ice-covered waters” – a term that Lalonde fears is unclear in a changing climate.

Lalonde said the framework also assumes that Arctic states are all willing to play by the rules.

“But do they have a common understanding of what those rules mean?” she said. “There’s a lot of disagreement about Arctic [boundaries]’

“We’ve been negotiating [these polar guidelines] since the 1990s. Do we want to take another 20 to 30 years to negotiate them? There will be a cost if that’s the approach we take.”

The Arctic in Transition conference, which has gathered researchers, lawyers and historians to discuss economic, political and security issues across the Arctic, wraps up Oct. 4 at the Université du Québec à Montréal.