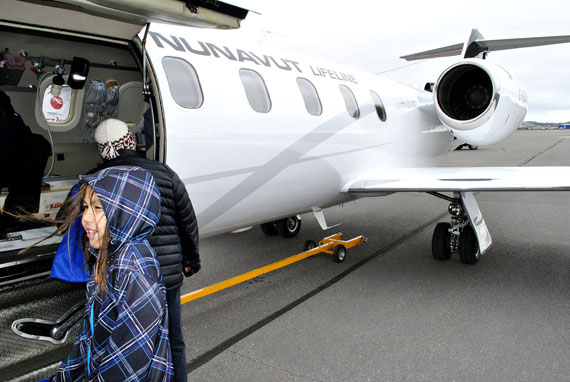 An air ambulance operated by Keewatin Air’s Nunavut Lifeline on display at the Iqaluit air show in 2011. Aircraft like these are used across the Arctic to medevac Inuit infants who fall prey to lower respiratory tract infections such as RSV and who often require life support at hospital intensive care units. (FILE PHOTO)

Now, thanks to the first in a series of Arctic-wide studies by a team led by Toronto-based researcher Dr. Anna Banerji, they’re now learning which Inuit regions suffer the worst infection rates and who pays the most to cope with them.

Lower respiratory tract infections, or “LRTIs,” struck the Kitikmeot region at a rate of 389 per 1,000 live births during that time, when researchers counted all lung infections requiring hospitalization in infants less than a year old.

The cost? For each live birth in the Kitikmeot region, the Nunavut government’s health department shelled out $22,375 and the average cost per lower respiratory tract infection hospitalization came to $57,535.

In total, the GN spent about $1.5 million on medical transportation for sick babies in the Kitikmeot and about $2.4 million on their hospitalization costs, at either the Stollery Children’s Hospital in Edmonton or Stanton Regional Hospital in Yellowknife.

The only Arctic region to show a worse lung infection rate was Nunavik, where Banerji and her team found they occurred at a staggering 445 per 1,000 live births.

“The rates we have in Nunavut and Nunavik are higher than the rates documented in sub-Saharan Africa and many developing parts of the world. A lot of people don’t recognize that we really do have, in a First World, resource-rich country, rates that are worse than the developing world,” Banerji said.

There, the average hospitalization cost per live birth was $10,333 and the total bill for the study period came to about $3.9 million. And sick infants cost the system an average of $23,203 each.

This meant the GN spent about $5.9 million to care for gravely ill Qikiqtani infants and about $5.7 million for sick Kivalliq infants during the study period.

And for all of Nunavut, GN bean counters were required to spend $15.6 million on sick babies with these lung infections over the 18-months of the study.

This stands in marked contrast to the Northwest Territories, whose government spent only about $1.5 million.

That’s primarily because the NWT’s lower respiratory tract infection rate was dramatically lower: only 38 per 1,000 live births, and average costs of only $1,400 for each child born.

And in the Inuvialuit settlement region, or “ISR,” whose population is primarily Inuit, lower respiratory tract infection rates were even lower: 18 per 1,000 live births with average costs of only $690 per live birth.

“The big difference is that the Northwest Territories has lower numbers for the ISR area,” Banerji said.

“Are their differences in access to health care? Are there differences in nutritional status? I don’t know. The study doesn’t address the “why” issues, but it does show a huge difference between regions on all the markers,” she said.

Another difference is that in the NWT, sick infants with lung infections spend an average of only a quarter of a day in hospital, compared with the two-to-three day averages found in Nunavut and Nunavik.

“In the NWT it’s a little bit higher than the South but it’s not drastically higher. But in Nunavut, where you have 2.2 days of hospitalization per live birth, that’s a huge number,” Banerji said.

And she said that a study to be published in the future is likely to show that Nunavut and Nunavik infants suffer more serious, intense lung infections.

“All of that implies that these kids in Nunavut and Nunavik are sicker, but we have other information, which we’re going to publish in other studies, which demonstrates definitely that children from Nunavut, especially in the Kitikmeot area, as well as Nunavik, are quite sick,” Banerji said.

But for now, this study focuses on what matters most to government officials: money.

“To the policy-makers, money is a sounder argument, if you can prove that something is financially sound,” she said.

To that end, one of her team’s future articles will study the cost of using a new vaccine called palivizumab, which is sold under the trade name “Synagis,” versus the cost of not using it for prevention of respiratory syncytial virus.

The RSV virus, which can cause a respiratory illness called bronchiolitis, an infection of the smaller airways in the lower part of the lung.

Banerji also said the public should know that RSV and other lung infections lead to serious long-term consequences.

“There are some studies that suggest these kids have changes in their lungs. No one knows how all this really impacts on the long-term,” she said.