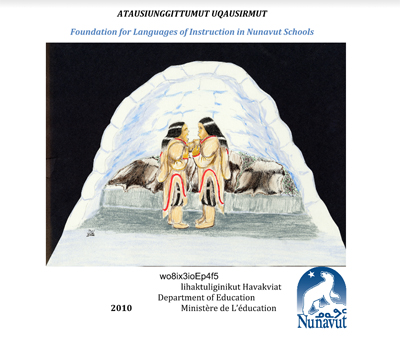 The GN’s Arviat-based Curriculum and School Services department produced a number of IQ-embedded learning materials in the 2000s that have yet to be implemented, including pedagogical framework for teachers and instructional strategies.

If Nunavut’s school system has failed to implement the Inuktut-language and Inuit-focused education it has worked towards since the territory’s creation, that is not for a lack of learning materials.

With the recent criticism and debate over Bill 37 and a showdown over the bill expected in next week’s resumption of the Nunavut legislature, some Nunavummiut are wondering what happened to several years worth of in-house curriculum developed in the 2000s.

Soon after Nunavut became a territory 1999, a team of educators, elders and staff of the Government of Nunavut’s Department of Education were mandated to develop a curriculum embedded in the traditional knowledge of Inuit Qaujimajatuqangit.

The second part of the team’s mandate was to rewrite all curriculum materials from kindergarten through Grade 12 in Inuktut to support the department’s goal of delivering a fully bilingual education.

“So that’s every aspect of your system,” said Shirley Tagalik, who led those efforts as the former manager of the Arviat-based Curriculum and School Services department.

“There were a number of materials developed in the mid-2000s and they never saw the light of day.”

Nunavut Tunngavik Inc. raised the issue of Inuktitut course materials as part of its review of Bill 37, the proposed amendments to the Education Act and Inuit Language Protection Act.

Among its more controversial points, the legislation proposed to delay the implementation of Inuktut instruction in Grades 4 to 9 from 2020 until 2030.

In an April 20 letter from NTI and the regional Inuit associations to Nunavut Premier Peter Taptuna and the legislative standing committee reviewing the proposed legislation, the Inuit organizations asked the GN to withdraw the legislation.

A committee of MLAs agreed and recommended the government kill Bill 37.

NTI and the Inuit associations also asked for more information on what Inuktut language of instruction material the GN had developed and was available for implementation.

“This would help all of us better understand the measures needed to counteract the erosion of Inuktut and how our resources can be used most effectively to achieve them,” the letter said.

The department of Education said it was unclear as to which materials Tagalik was referring to. In an email to Nunatsiaq News, the department said that “there may be a resource (not curriculum) that was being developed during that time and it is possible that the project could have been discontinued due to project team members returning to work in schools or leaving the territory.”

Those programs received recognition from 18 universities across Canada, she said.

It was piloted in a few schools to “rave reviews,” she said, even as a language reclamation tool or for first or second language learners.

“The department in Iqaluit never really understood the competency-based approach, and instead, they kept focused on outcomes,” Tagalik said.

“But learning content isn’t culturally appropriate—you need to learn the strategies and skills to show you can apply that information in a meaningful way.

“It’s a completely different approach to education. It ensures that people know how to think well and react. This is what has allowed Inuit to thrive for thousands of years.”

But Tagalik said there were implications that the work was not of value or up to standards. She resigned from her role in 2009 and has heard little about the materials until recently.

Ian Martin, a York University English professor who worked with Tagalik’s team in the 2000s, said that in failing to implement the Nunavut-made curriculum, the territory has failed to develop the strategy needed to train Inuit teachers in the numbers needed to support a bilingual education system.

“Instead, the department chose to import curriculum written in English and to rely on a majority of monolingual English-speaking teachers from the South, with predictably negative results,” he said.

In his recent paper called “Inuit Language Loss in Nunavut,” Martin called on the GN to establish a strong research and development curriculum body responsible for the “intellectualization of Inuktut,” which would work to convert IQ into instruction units.

For her part, Tagalik said she believes the unused curriculum materials should be introduced as part of the Nunavut Teachers Education Program, so Nunavut’s teachers-in-training can get familiar with the made-in Nunavut course materials before they enter the classroom.

Either way, Tagalik said she wants Nunavummiut to at least know about all the materials she and her colleagues developed.

“I think certainly that a lot of people in Nunavut were not aware there were enormous systemic changes underway,” she said.

“It’s hugely hopeful that NTI is taking this on.”