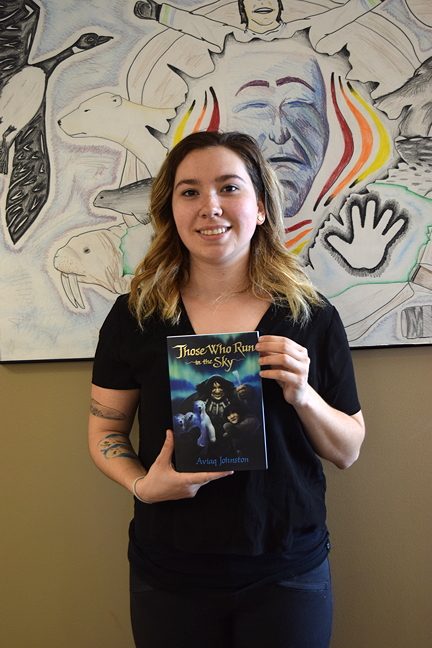 Aviaq Johnston holds up a copy of her new young adult novel, Those Who run in the Sky, published by Inhabit Media and set for launch April 13 at the Nunavut Sivuniksavut offices in Ottawa. (PHOTO BY COURTNEY EDGAR)

OTTAWA—When Aviaq Johnston sits down to write, she always makes Red Rose tea. She says it makes her better able to think about her work.

Typically she will write at the kitchen table if she is at home in Iqaluit, or she will go to a coffee shop if she visits her other home, in Ottawa.

Whether at the kitchen table or a café, both are close enough to her favourite tea.

The 24-year-old’s first novel Those Who Run in the Sky, published by Inhabit Media, will be launched on April 13 at Nunavut Sivuniksavut on Rideau Street in Ottawa.

The book is a coming-of-age story about a young hunter who is learning to become a leader.

When he is swept away in a blizzard to the spirit world—without a dog team or weapons—Piturniq encounters a shaman and many mythical creatures including demonic wolves, water-dwelling creatures and a giant, as he tries to find his way back home.

He may not have a lightning bolt scar on his forehead, but Piturniq, the main character of Johnston’s recently published young adult novel, can be seen in some ways as an Inuk version of Harry Potter. Johnston said she has often heard the comparison.

“I didn’t try to make similarities but it takes place in a magical world,” Johnston said. “And the main character isn’t the chosen one or anything, but he has a lot on his shoulders.”

Despite all that, Johnston said the protagonist is still otherwise pretty unique.

“I didn’t really base him off anyone,” Johnston said. “I made him a strong male character because right now in Nunavut there is a lot of social issues and a lot of the main people facing those issues are young males.”

According to some statistics from the past decade, the suicide rate among Nunavut male youth was estimated at about 500 per 100,000 people while it ranged between 12 and 14 per 100,000 for Canadian male youth in general, according to Statistics Canada.

The suicide rate for Inuit is 11 times higher than the national average, and the majority of Inuit deaths by suicide are people under the age of 30—more often involve men.

“It is highest among the male population, from like 15 to 25,” Johnston says. “So I thought I wanted my main character to be a very strong character who could kind of be like a role model. He is very grounded and he is a very wise teenager.”

Born in Iqaluit, Johnston grew up in Igloolik, but now considers her home equally in Ottawa and Iqaluit. Currently doing an eight-week practicum at Nunavut Sivuniksavut and approaching graduation in social work from Canadore College in North Bay, Ont., Johnston said she is a self-taught writer.

Although the young author did begin an English degree at the University of Ottawa a few years ago, she said she soon realized that studying English made her “detest” the subject.

“I took a year off and did my own creative writing,” Johnston said. “I prefer doing it for myself, not for school. I loved reading and writing as a kid but going to school for it just wasn’t fun.”

During that time, she wrote her short story “Tarnikuluk,” which means “little soul.” In 2014, it placed first in an art and creative writing competition for Canadian Aboriginal youth and then won the Governor General’s History Award, established in 1996 by Canada’s National History Society.

Shortly after winning those awards, Inhabit Media contacted her, offering her the opportunity to publish a novel with them.

“I met with them and they said I could write about anything I want,” Johnston said.

She knew she wanted to write a story about Inuit, but couldn’t really think of a way to do a contemporary story. Having been a fantasy fan for a while, she thought doing a story about shamanism would be cool and that she could put a “kind of modern tone on it.”

“I decided I didn’t want to do another novel that is about a dystopian future,” Johnston said. “And I thought my own culture has so much good stories in it already.”

Since a lot of Inuit youth don’t get to hear them, Johnston decided she would make her own version of the stories she grew up hearing.

It took about six months to write the manuscript while Johnston was working full time. She would often not write for a couple of weeks at a time.

She said she would suddenly get inspired and write a whole string of chapters, sometimes even out of order. But she admits to leaving much of it to the last minute and working hard to catch up in the final month before her deadline. It was a humbling experience, she said.

The book will be available for sale at the launch in Ottawa on April 13 or it can be ordered through booksellers online. Johnston said at the moment, Arctic Ventures in Iqaluit is the only she knows which will be carrying Those Who Run in the Sky.

As for future projects, Johnston has already started writing the sequel to her latest novel but she also has a children’s book coming out in June, also from Inhabit Media. It is called What’s my Super Power? and it’s about a girl who is able to figure out everyone’s super power but her own.

“It is about knowing who you are and being comfortable with it,” Johnston said.