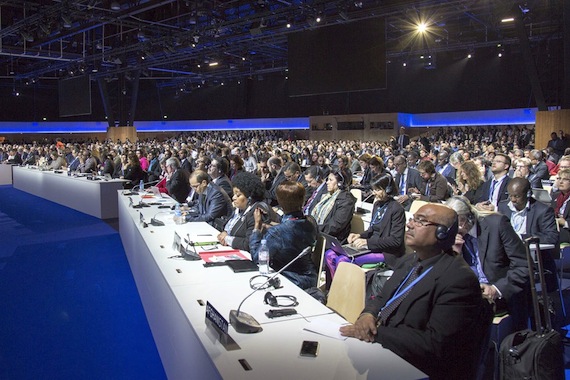 Delegates at Dec. 8 plenary session of the United Nations climate change conference are likely to meet beyond the planned Dec. 11 wrap-up for COP21. (PHOTO BY UNFCCC) 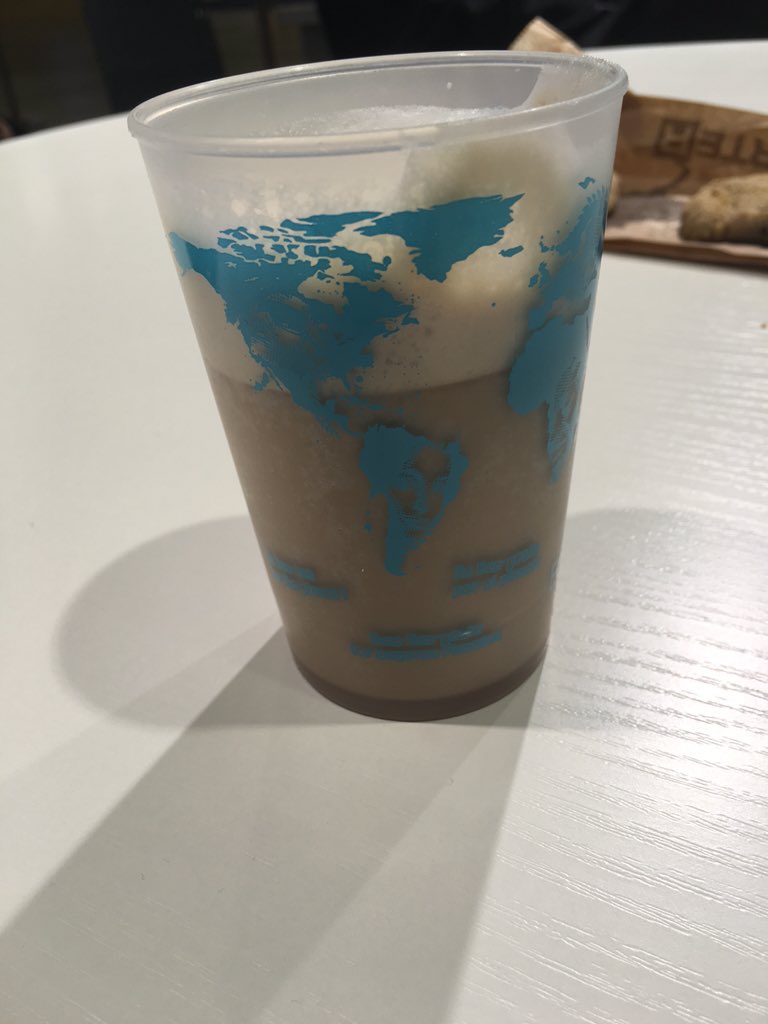 A cup of coffee in a reusable COP21 cup, posted early Dec. 10 by Canada’s environment and climate minister and chief COP21 negotiator Catherine Mckenna on Twitter, where she quipped to Green Party leader Elizabeth May, a member of the Canada’s COP21 delegation, that she was “happy to know you’re up too” after a long night of talks. (PHOTO/ TWITTER) A higher global temperature increase equals more Arctic melt and sea level rise — and waves at the doorstep of people who live in the world’s southern islands, as seen in this photo taken on the island Barbados in the Caribbean. (PHOTO BY JANE GEORGE)

The world’s coldest and hottest regions on Dec. 9 called for greenhouse gas emission cuts that will be deep enough to limit the average global temperature increase to 1.5 C.

Their joint call came Dec. 9, as delegates to the COP21 United Nations climate talks in Paris sat down to finalize the latest draft text of a new agreement for a pact aimed at limiting global climate change.

The statement from the Inuit Circumpolar Council, Saami Council, the Pacific Indigenous Network and the Government of the Seychelles followed the Dec. 9 release of a new draft text for the “Paris Outcome,” which showed, among other things, that there’s still no agreement among the 195-plus nations at the talks on how to put limit on the world temperature increase, to 2 C or less.

“We are seeing significant climate related impacts in the Arctic at one degree Celsius so 1.5 degrees is more than enough,” said Okalik Eegeesiak, ICC’s international president, in the release.

Eegeesiak said that even a 2 C limit would lead to “dramatic and irreversible effects on Arctic communities,” where any increase is expected to be two to three times higher than elsewhere in the world.

“We are a pragmatic and adaptable peoples, but 2 degrees Celsius will be an insurmountable challenge,” she said.

And, as the Arctic melts and the sea levels rise, Eegeesiak said, one billion people living in low-lying areas are at risk of becoming the “new environmental migrants.”

“We are on the front lines of climate change. Science tells us that 2 degrees is a threshold after which climate change effects will become even more severe. Even 1.5 is too high but it will buy us some time to adapt,” he said.

Aile Jávo, the president of the Saami Council, which represents Saami in northern Norway, Sweden, Finland and Russia, also said that “we need to see some action and fast.”

The Arctic and island leaders pointed to Canada, which supports the 1.5 C target, as an example of “the kind of commitment that countries at COP21 need to demonstrate for the negotiations to succeed.”

“There must be an immediate, concerted effort by the global community to address climate change,” said Maatalii Okalik, the president of the National Inuit Youth Council. “Our future depends on it.”

The Seas at Risk and Transport and Environment lobby groups slammed the Dec. 9 draft text which had omitted aviation and shipping as contributors to climate-warming emissions.

“The dropping of international aviation and shipping emissions from the draft Paris climate agreement… has fatally undermined the prospects of keeping global warming below 2 C,” the two groups said in a joint statement.

A plan to reduce short-lived climate pollutants, such as soot and methane, within the next five years was endorsed Dec. 9 by 49 ministers, 16 intergovernmental organizations and 44 non-government organizations.

Catherine McKenna, Canada’s chief COP21 negotiator and federal minister of environment and climate change, said in a statement that “short-lived climate pollutants are responsible for a substantial portion of the current rate of global warming.”

“Sustained reductions can help slow the rate of near-term warming, globally and in sensitive regions, such as the Arctic. As a northern country with a vast Arctic territory — this is extremely important to Canada,” McKenna said.

She said Canada would commit $35 million over five years to address short-lived climate pollutants, with $10 million to be dedicated to a climate change clean air coalition trust fund.

A new draft COP21 text is set to be announced sometime during the afternoon of Dec. 10, according to an agenda sent out late Dec. 9.

Negotiators continued all-night meetings into Dec. 10, still with the goal of having the final document ready by 6 p.m. (Paris time) on Dec. 11 — but decided later to push this deadline ahead, until Saturday morning Dec. 12, to gain more consensus on the many unresolved issues.