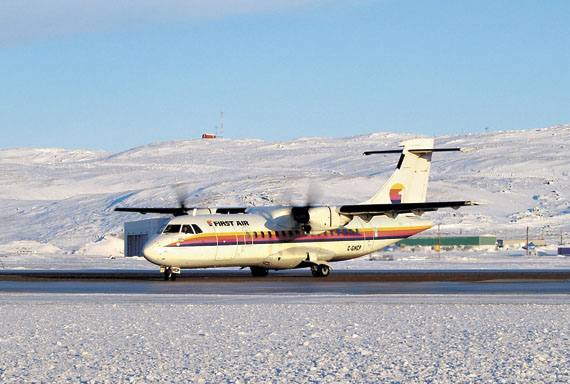 A First Air ATR at the Iqaluit airport in an undated file photo. The board of Makivvik Corp. has decided to retain full ownership of the airline. (FILE PHOTO)

The Makivvik Corp. will not sell First Air to Norterra or any other buyer, Makkivik’s board said in a statement Oct. 3

“After a rigorous review of its strategic options, the board confirmed its decision to retain full ownership of this important investment,” Makivvik said.

At the same time, Makivvik said their president and chief executive officer, Kris Dolinki, will resign his position as of Oct. 12, for personal reasons and “to spend more time with his young family.”

Dolinki has served in First Air’s top job since December 2011, when he succeeded Scott Bateman.

“For more than two years, Mr. Dolinki assisted the board with a rigorous review of our strategic alternatives. Kris had committed to see that project to its conclusion and with that behind us, it is time for new leadership to guide the future direction and success of First Air,” said Jobie Tukkiapik, president of Makivvik Corp.

This past spring, reliable sources told Nunatsiaq News that Norterra, the 50-50 Inuvialuit and Nunavut Inuit owner of First Air rival Canadian North, was in talks with Makivvik to discuss a purchase or merger.

But officials with Norterra would not confirm that such a deal was under discussion.

Makivvik, the birthright organization for Nunavik Inuit beneficiaries of the James Bay land claims agreement (which has also used the spelling Makivik), has owned First Air since 1990 and operated it as a wholly-owned subsidiary.

The firm now employs more than 1,000 people, about 450 of whom live in northern Canada.

This past June, the two companies announced they had won about 95 per cent of the Government of Nunavut’s air cargo business.

And Tukkiapik said the Makivvik board and First Air’s management will go to work on “several strategic initiatives with a renewed focus on working with our joint venture partners.”