Fundraising campaign on to bring Inuit to New York City 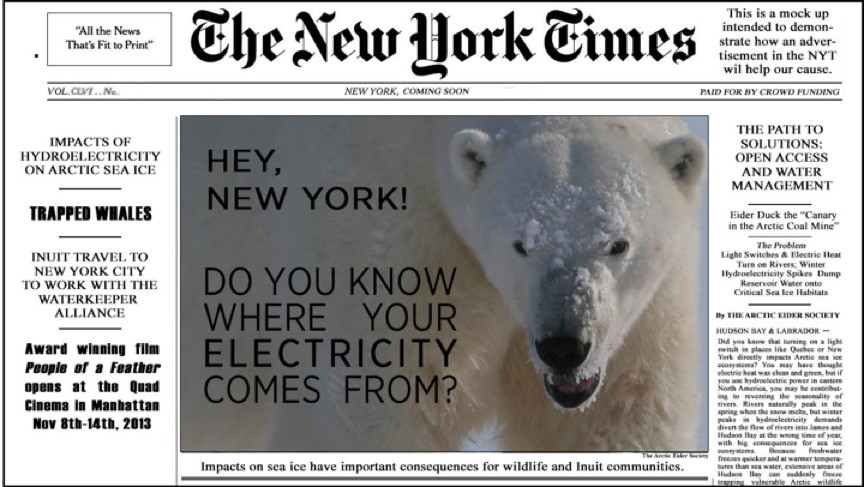 This is a the kind of advertisement The Arctic Eider Society is hoping to buy in the New York Times to advertise their upcoming film screening of People of the Feather, a documentary about the impact of hydroelectric dams on marine wildlife in Hudson Bay.

The more people who flick their light switches on in New York, the more dangerous fresh water is spilled out onto Arctic sea ice in Hudson’s Bay, directly affecting the marine ecosystem near Sanikiluaq.

That’s the message from a group that made the 2012 film People of a Feather, which documents the impact that Hydro-Quebec dams are having on people and wildlife.

The non-profit Arctic Eider Society, which made the film, is hoping their upcoming screenings at the Quad Cinema in Manhattan Nov. 8 to Nov. 14 will help make New Yorkers aware of how their day-to-day actions have implications thousands of kilometres away.

“Inuit have been working to address the accumulative impact of hydroelectric projects on sea ice in Hudson Bay for the last 20 years,” said president and co-founder of the Arctic Eider Society, Dr. Joel Heath.

To reinforce the message, Heath’s society is raising money through crowd-sourcing site indiegogo to bring several Inuit who were involved in the making of the film to New York City to speak directly about how the dams impact their lives.

They want Daniel Qavvik and Lucassie Arragutainaq from Sanikiluaq and two others from Labrador to make presentations at public forms held after the screening and hosted by the Waterkeeper Alliance, an organization that helps protect waterways and their communities worldwide.

The fundraising goal — $25,000 — will pay for travel and accommodations for their Inuit visitors and for an advertisement in the New York Times informing New Yorkers that their energy comes largely from hydroelectric dams in Quebec and how those dams affect Arctic marine wildlife.

Here’s the problem with the dams: when demand for energy goes up, Hydro-Quebec needs to push more water through the turbines, releasing plumes of freshwater from their reservoirs into Hudson Bay.

Because there’s less salt in the water, it freezes more quickly and can lead to animal entrapments such as what happened in February.

“This past winter there were some pretty dramatic changes with Hydro-Quebec breaking a record for electricity demands,” Heath said.

And there are big problems with Hydro-Quebec. Heath said there is no regulation covering the dumping of water from Quebec’s dam reservoirs at the most inopportune moments.

“Our community-based research team documented some of the freshest water we’ve ever seen in Hudson Bay, which coincided with the entrapment of belugas and orca whales,” Heath said.

Heath wants Hydro-Quebec to start considering how water is managed, and wants open access to their data.

And a new Champlain-Hudson river cable that flows from Quebec’s hydroelectric dams to New York City will be a discussion point, too.

“We want to make sure that if that’s going to go ahead, then there’s a consideration of what’s happening at the other end of those wires.

“We need organizations to sign on to try to push Hydro Quebec to start thinking about open access and community and accumulative impacts on the marine ecosystem,” Heath said.

Meetings and round table discussions with several grassroots organizations, policy makers and experts in New York City are expected to occur in advance of the film screenings

Organizers plan to bring what they’ve gathered at those meetings to public panel discussions which will take place when the film is over. It’s there they hope to have Inuit present and on stage to offer their unique perspective and knowledge about water and marine life.

The potential Muskrat Falls hydroelectric dam on the Churchill River in Labrador is also on Heath’s radar — he thinks this movement has the potential to stop that dam from being built.

“It might. It certainly puts consideration on how that dam goes in and how the water is managed and that kind of thing,” Heath said, adding that officials from Labrador will be in New York to attend the meetings.

Overall, Heath said he is optimistic about the upcoming events in the Big Apple.

“We’ve been connecting with people here that have been working since Bobby Kennedy [Robert F. Kennedy Jr.] shut down the Great Whale project in the 1990s.

Screenings of the show will occur five times a day for one week at the theatre, starting Nov. 8.

Heath said the box-office result will determines how often it will screen at other places in New York. Other fundraising screenings will also take place across Canada, he said.