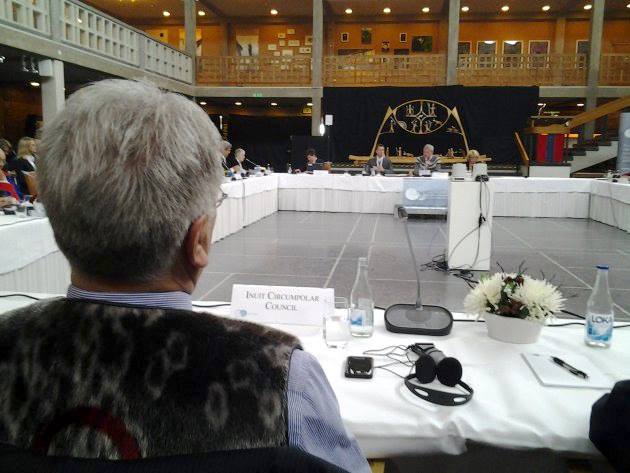 Aqqaluk Lynge, president of the Inuit Circumpolar Council, sits May 15 in the city hall in Kiruna, Sweden during the Arctic Council’s ministerial meeting. Lynge, speaking on behalf of ICC, a permanent participant at the council, said ICC supported the Kiruna Declaration in full. Lynge, ICC-Alaska’s president, Jimmy Stotts, ICC-Greenland’s president Carl Christian Olsen and environmental consultant Parnuna Egede attended the ministerial on behalf of ICC. Greenland’s premier did not attend the ministerial to protest the lack of a seat — and a vote — for the Greenland government. (PHOTO COURTESY OF ICC)

The decision by Aleqa Hammond, Greenland’s premier, to boycott the May 15 Arctic Council ministerial in Kiruna, Sweden continues to dominate political discussion in Greenland, where it appears she’s facing a big backlash from the public.

Many in Greenland don’t think Hammond made the right decision.

According to an online poll conducted by Greenland’s leading newspaper, Sermitsiaq AG, of 1,680 who have participated in the poll so far, 65 per cent say Hammond made a mistake by turning her back on the Arctic Council.

Jens B. Frederiksen, chairman of Greenland’s Demokraatit party, said the gesture resembled that of the former Soviet Union leader Nikita Khrushchev, who pounded the podium with his shoe in 1960 in the United Nations over a delegate’s comment on the lack of human rights in Russia.

“Was this protest mad or brilliant? Neither, of course,” Frederiksen said in an interview with Sermitsiaq.

“It was just an expression of ‘bad taste’ — and that rarely goes a long way in international negotiations.”

Frederiksen also questioned the logic of boycotting the ministerial meeting where Sweden — blamed for downgrading Greenland’s presence at council negotiations — was handing the chairmanship to Canada until 2015.

“The main issue for me is not whether it will be noticed, but if Greenland gets anything out of it,” he said of Hammond’s deception.

“Does this bring us one step closer to permanent participation in the Arctic Council’s deliberations — or do we rather put ourselves in a position where the prospect of permanent representation is now more distant than ever, and the diplomatic efforts of recent years are wasted? Representatives who act that way in international negotiations are not exactly the ones you may welcome in the circle.”

Frederiksen said Greenland may pay a high price for Hammond’s decision because the person who slams the door in anger is in danger of being left outside.

“So you can stand there and cool. But who are the most affected? Those who sit in the warmth, or the one could not rein in his temper?”

Hammond’s decision to boycott the ministerial even surprised coalition partners, according to the reaction of Atassut chairman Gerhardt Petersen and Partii Inuit’s chairman Nikku Olsen, who were interviewed shortly after Hammond announced her decision not to take part in the Kiruna gathering.

Greenland’s foreign and security policy committee has also distanced itself from the decision, which they said Hammond made on her own.

Per Berthelsen of Demokraatit party, who chairs the committee, said he doubts that Canada will be more open to more direct Greenlandic participation than Sweden was during its two-year chairmanship.

And should Greenland gain direct participation in Arctic Council negotiations, then Canada would suddenly be left with a dilemma, he suggested, and “our kinsmen would probably demand the same role as Greenland.”