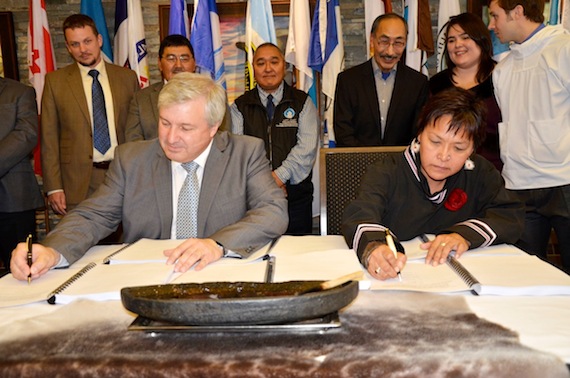 The Qikiqtani Inuit Association released the public version of the Mary River Project Inuit Impacts Benefit Agreement Dec. 6 — an agreement that sets out the working relationship between Nunavut Inuit and the Baffinland Iron Mines Corporation.

“It is QIA’s wish to share the IIBA openly,” said QIA president Okalik Eegeesiak in a Dec. 6 release. “We believe this will provide an opportunity to strengthen our implementation efforts.”

The agreement would likely direct millions of dollars into QIA’s coffers after the mine moves into commercial production. The deal also came with a signing bonus.

But most of the financial arrangements contained in the IIBA remain confidential, including royalty rates and land lease payments, although QIA said “amounts received as a result of the project will be reported at each annual general meeting.”

The full impact and benefits agreement provides few details that aren’t already included in the plain language guide that was first released this past September, when QIA officially signed the deal with Baffinland.

The agreement lays out how royalities will be paid to QIA: quarterly, beginning with the first quarter after commercial production begins at the mine.

The royalty payment is defined as “the net sales revenue for a period multiplied by the royalty percentage.”

However, the royalty rate is not disclosed.

Those payments can be re-negotiated after 30 years, or once 1 billion tonnes of iron ore have been mined.

As part of the IIBA, an implementation budget will be created along with several funds, which include:

• Ilagiiktunut Nunalinnullu Pivalliajutisait Kiinaujat Fund (a fund to offset negative social or cultural impacts created by the project and to help distribute benefits) — $750,000 per year paid by BIMC and QIA equally for the first six years;

• education and training fund — $1 million for the first two years the IIBA is in effect, paid by BIMC;

• money to pay the costs associated with implementation of any rights, obligation or requirements of the IIBA.

An executive committee will be established to oversee implementation of the IIBA, made up of three senior representatives from the QIA and another three from Baffinland.

That committee will meet four times a year, and will be tasked with coming up with the minimum Inuit employment goal at the mine; reviewing a list of training and education opportunities for Nunavummiut and looking at contract award issues.

Both the executive committee and a separate management committee respond to the need for any dispute resolution.

They’ll also hire two IIBA coordinators, along with Inuit monitors, an elder in residence, a QIA employment and training coordinator and environment monitors.

Baffinland is in the process of building an iron mine at Mary River in northern Baffin Island that start by producing 3.5 million tonnes of iron ore a year.