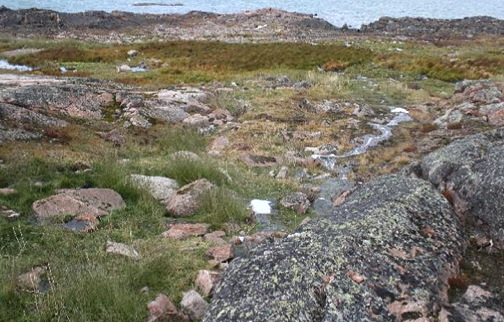 The wetland treatment area in Kugaaruk, photographed in 2012. (PHOTO BY ROB JAMIESON) 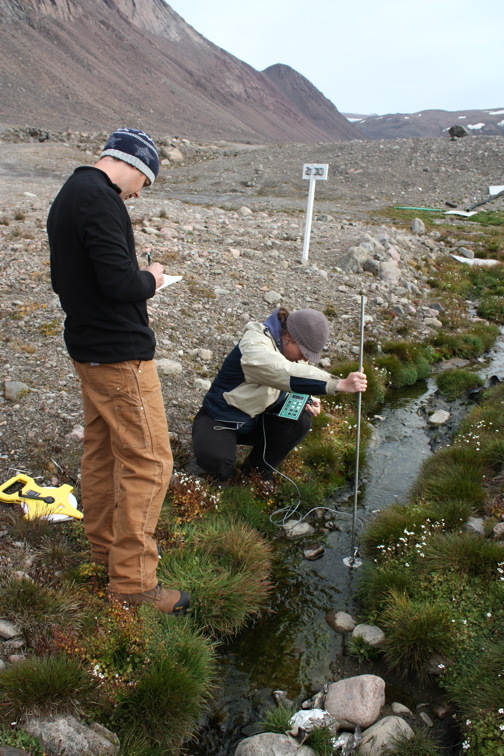 A woman in Kugaaruk flushes the toilet.

If you follow that flush, it eventually ends up on the tundra outside of town.

Before alarm sets in, consider this: A team of researchers from Dalhousie University’s Centre for Water Resources Studies say this is actually fine, provided that such a “passive” system of wastewater treatment is properly situated and designed.

Rob Jamieson, head of the Dalhousie centre, and his team are wrapping up a five-year, $3.3 million study of wastewater treatment in Nunavut and they’ve concluded that sewage lagoons and natural tundra filtration systems can adequately clean Nunavut’s limited quantities of waste and gray water.

“The two planned wetland systems that we looked at, in Coral Harbour and Kugaaruk, both of those systems were producing effluent that would meet the wastewater standards that are now being applied in southern Canada,” said Jamieson.

The key is this: The Government of Nunavut needs to draft design standards to ensure the patchwork of systems across the territory are all working properly

And Jamieson’s study will likely help the GN do that.

Kris Mullaly, a spokesperson for CGS, said June 16 that the GN is committed to improving wastewater standards but might need help from Ottawa to do so.

“As far as CGS is concerned, this is a health and safety issue so it’s one of our top priorities,” Mullaly said June 16.

And if the GN can base new policies on scientific studies like Jamieson’s, that might strengthen requests for federal funding when the time comes to address wastewater shortcomings in Nunavut, Mullaly added.

“At least Nunavut is demonstrating — we’ve done our research, here’s what the findings are, so anything we ask for, funding-wise, will be reasonable.”

The study, funded through the federal gas tax system, is the first long-term comprehensive examination of wastewater treatment in the Canadian Arctic. And not a moment too soon.

The federal government, in 2012, amended the Fisheries Act to include new baseline water quality standards for wastewater effluent in Canada.

But recognizing that remote northern communities lack the infrastructure, money and expertise to install and maintain modern wastewater treatment plants to meet those standards, all communities north of the 54th parallel were exempted from the new rules.

That line of latitude is near the northern tip of James Bay so the exempted area include Sanikiluaq, Nunavik and a good portion of Labrador.

The Department of Community and Government Services is responsible for wastewater treatment facilities in all Nunavut communities except for Iqaluit, which is maintained by the city.

Twenty-one Nunavut communities have “passive” wastewater treatment systems — either a sewage lagoon alone or a lagoon in combination with a wetland tundra area.

Isaac Shooyook, the Nunavut MLA for the High Arctic constituency of Quttiktuq, asked about wastewater standards in Grise Fiord June 2 during the legislative assembly’s spring session.

“I received a number of concerns about the condition of the community’s sewage lagoon,” Shooyook said, in a question to Joe Savikataaq, then minister of community and government services.

“The need to rehabilitate and/or replace the sewage lagoon was identified in the community’s integrated community infrastructure plan.”

Savikataaq told Shooyook about the Dalhousie study and said once all the results are in, CGS will prioritize which community’s treatment systems need to be fixed first.

While Ottawa has exempted northern communities from the new wastewater standards, it doesn’t mean those communities can pollute at will, said James Arnott, manager of the wastewater program for Environment and Climate Change Canada.

The Nunavut Water Board currently sets minimum standards for water quality in Nunavut and that includes industrial and municipal waste, Arnott said.

Ottawa would like to bring northern communities under a common water quality standard at one point but there’s no deadline to do so, he said.

Once this Dalhousie study is completed, Ottawa will continue discussions with northern governments to debate best practices in cold, remote environments and hopefully come up with a plan to standardize wastewater quality across the North.

“Effluent from wastewater treatment facilities across the country is the largest source of pollution to water,” Arnott said.

“There are existing standards, and existing systems that apply in the North but when it comes down to it, are they adequate or should we look at improving those? That’s all the work going on,” he added.

So while governments continue to discuss future standardization, what does that mean for the rivers, shorelines and bays where Nunavummiut harvest fish, shellfish and other country foods — are they safe?

Jamieson explained June 16 that, since 2012, his team has come north every summer and visited six communities to examine local systems and test the water.

In most cases, the volume of wastewater is so low — Nunavummiut use, on average, 100 litres of water per person, per day, compared to 300 litres for the average Canadian — and the ocean is so large that any trace contaminants that reach the ocean are quickly diluted and dispersed, Jamieson said.

Most human waste and gray water in Nunavut goes into sewage lagoons which are designed to hold a year’s worth of wastewater and which are generally frozen for about nine months of the year.

At the end of summer, after the ice and ground have thawed and solids have sunk, water can be released into a wetland tundra area whose plants, soils and naturally occurring bacteria filter out or consume troublesome bacteria such as E. coli.

The water should ideally flow through the wetland for a minimum 14 days for sufficient treatment so the area has to be properly sloped with no direct “shortcuts” to allow the wastewater to drain out prematurely.

Even in Pond Inlet which has only a lagoon, when hamlet crews pump the water over a rocky embankment which leads to the ocean at summer’s end, the level of impact on the ocean is “minimal,” Jamieson said.

Hamlet officials just need to ensure local residents know which areas of the tundra are used for wastewater treatment so, for instance, they don’t pick berries there or collect shellfish on the shoreline below, he added.

In April, Jamieson and his crew submitted to the GN a report which talks about community engagement as well as a set of potential design and assessment guidelines for tundra wetland treatment areas.

Researchers plan to test those guidelines during their last field season this summer in Sanikiluaq, Naujaat and Cape Dorset before preparing their final report to the GN in December 2016.