Maud shipwreck to be raised, retrieved from Nunavut in 2015

“We had hoped to get in a little bit earlier” 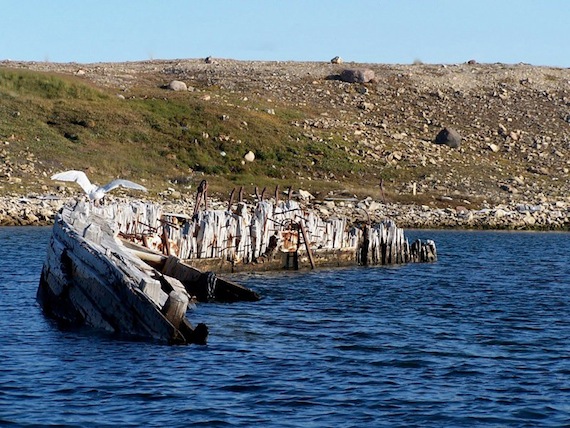 The wreck of the Maud as it appears today in the waters off Cambridge Bay. Plans to raise what’s left of the ship, once sailed by Norwegian explorer Roald Amundsen, will get underway this month. (FILE PHOTO)

A Norwegian group’s plans to raise the wreck of the Maud, launched by that country’s famed explorer Roald Amundsen in 1917, will not begin in Cambridge Bay until next summer, project leader Jan Wanggaard said.

“We had to make a decision to just prepare for the winter,” Wanggaard said from Cambridge Bay.

The group put off its original plan to raise the wreck this year, after difficult sea and ice conditions caused delays in the arrival of a tug and barge from Norway.

The vessels, manned by a crew of six, will eventually take the wreck back to Norwegian town of Asker, near the capital Oslo, where the ship first took to the sea almost a century ago.

Plans call for the wreck to be loaded on the Jensen, as the barge is called, which the tug Tandberg Polar will then pull through the Northwest Passage, and on to Norway.

The tug and barge set out from Norway June 25, to cross the Atlantic, then headed out for Cambridge Bay from Nuuk, Greenland.

The vessels arrived in Cambridge Bay on Saturday, Sept. 6, at about 7:30 p.m.

“They dropped anchor pretty close to the Maud, so it was a bit of an emotional moment for us all,” Wanggaard told Nunatsiaq News, Sept. 8.

“They finally made it through this difficult part of the Northwest Passage, relative to the ice situation,” he said.

The group, known as Maud Returns Home, plans to do “preliminary work” on the wreck for the remainder of the summer, in preparation for the big job next year.

“We knew this is going to be very dependent on factors we can’t control,” Wanggaard said. “Of course we had hoped to get in a little bit earlier, but we are extremely relieved to be here at all.”

For now, the Maud group will park their tug and barge for the winter. The next stage of the project — raising the wreck out of the water and onto the barge — will take place next summer.

“We will have most of July and August next year to do the raising, and to prepare for departure,” Wanggaard said.

The trek back to Norway will be a two-stage trip, which promises to be every bit as challenging.

The wreck will head for Greenlandic waters late next summer, and dock in the capital Nuuk, where it will spend the winter of 2015.

The voyage back to Norway will continue in the spring of 2016, Wanggaard said, “to have the least possibility of rough weather for the crossing of the Atlantic.”

Plans to raise and retrieve the Maud date back to 1990, when the Hudson’s Bay Co., which officially owned the wreck, sold it to Cambridge Bay, which then transferred ownership to the Norwegian town of Asker.

Full-blown plans to raise and take the ship did not take shape until 2011, when Asker-based building and development company Tandberg Eiendom financed the project to bring it back to Norway.

Wanggaard admitted the project met with some resistance in Cambridge Bay, where many residents see the wreck as a local landmark and part of Arctic Canada’s historical heritage.

Part of his job in Cambridge Bay has been to describe the importance of the shipwreck to Norway’s own historical heritage, he said.

“I spent the last three of four years here in the summer,” he said. “I got to know the local attitude, and the understanding of this, and of course there are emotional sides to this.

“The situation is that the Maud is going to disintegrate, if it stays there,” Wanggaard said. “Nobody has done anything to protect it for the future.”

“In my experience, the more knowledge they get about the history of the Maud and the role it has played in the history of Norway, people will understand that this is a ship that deserves a better destiny than disintegrating here, gradually in Cambridge Bay.”

The group’s plan calls for the restored wreck to be exhibited in a museum in Asker, hopefully in time for the 100th anniversary of the ship’s christening.

“I fully respect that this also has a role in the history of Cambridge Bay, and we will also focus on that, when we present the Maud at the end of this process,” Wanggaard said.