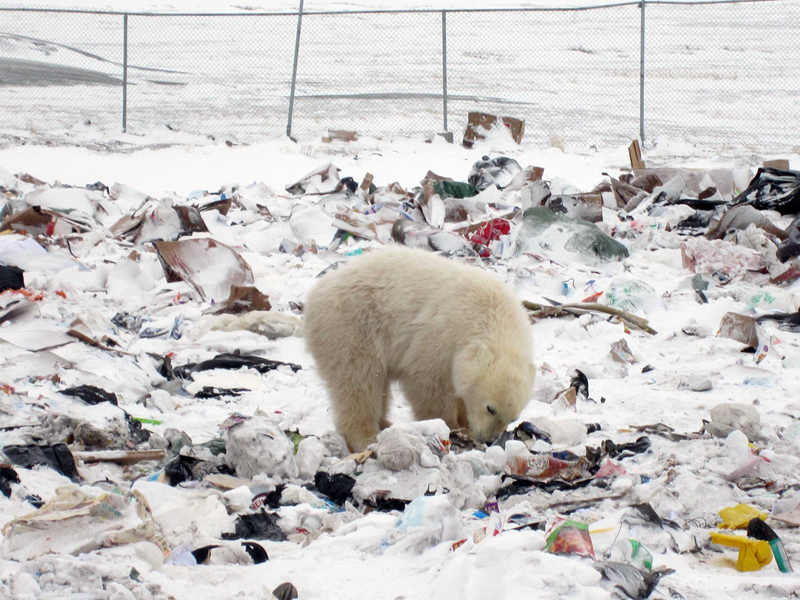 A polar bear rummages around the dump outside of Arviat. The hamlet hopes to renew a contract with the World Wildlife Foundation that helps pay a polar bear monitor to protect the community from nuisance bears. (PHOTO COURTESY OF THE HAMLET OF ARVIAT) 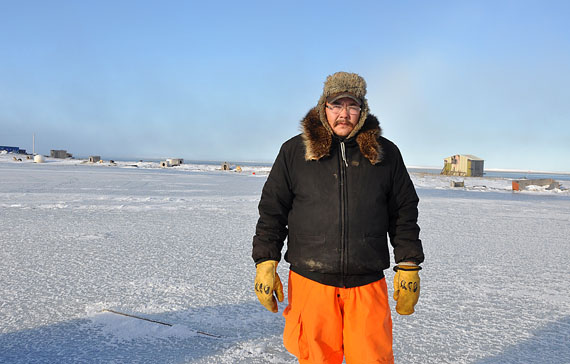 Leo Ikakhik stands by a dog team in the east end of Arviat – a popular attraction for polar bears who can smell the dogs’ seal meat. (PHOTO BY SARAH ROGERS)

ARVIAT — Last Wednesday night in Arviat sounded like Canada Day, the 1st of July, with residents posting on social media about the bangs and explosions going off outside their bedroom windows.

But this is October — polar bear season — and those sounds were not fireworks but bear bangers set off to scare a polar bear approaching a dog team on the outskirts of town.

“It was a busy night,” said Leo Ikakhik the following day, seated on his couch at home.

Ikakhik, 53, is better known as Arviat’s polar bear monitor or night watchman, a midnight shift he’s worked over the last three winters to help protect the community from late-night visits from bears.

“Even though I start at midnight, I got a call at 10:30 to go help the wildlife officers,” he said. “And I’m glad they did, because we were dealing with a mother bear and her cubs.”

It took Ikakhik almost a whole box of cracker shells to scare the polar bear away from the dog team, where she surely smelled seal meat.

“Sometimes there were some tense moments,” Ikakhik said, “because when we got close enough the mother started charging at us and we’re only on ATVs.”

A rubber bullet shot into the bear’s rump finally sent her — and her cubs — northwards. To send them south would only mean they’d likely come back again on their migration north, Ikakhik pointed out.

Ikakhik was hired three years ago under a program run through both the local hamlet and the World Wildlife Foundation.

When Arviat began to see polar bears coming into the community about a decade ago, many of them were getting shot and killed.

That got the attention of the World Wildlife Fund, which wanted to help sustain the polar bear population.

And the community didn’t want to keep shooting them either. For each “defence of life and property kill,” that was one less tag on the community’s annual polar bear hunt quota.

So WWF and the hamlet teamed up to fund the position, hiring Ikakhik each year from October to December — the period when polar bears are migrating north.

And so far, so good. While there were seven defence kills of polar bears in Arviat in 2010, when Ikakhik’s position was created a year later, there were only three. And there haven’t been any nuisance polar bears killed in Arviat since.

Ikakhik’s experience made him a good fit for the job; he’s worked for years doing aerial wildlife surveys across the territory.

This job keeps him on the ground. A typical night is spent driving through town on an ATV or snowmobile.

Ikakhik says he starts in the northeast part of town and zigzags through Arviat’s streets moving west, and then south.

Ikakhik spends a good amount of his shift in the eastern boundary of the town, where many dog teams are set up across the tundra.

With stashes of seal meat nearby, or even just the scent of recently-eaten meat, the dog teams are a big draw for hungry polar bears.

In late September, a polar bear attacked and killed a sled dog in Arviat.

Although that’s rare, Ikakhik believes it would happen more often if he wasn’t patrolling at night — nine years ago, one polar bear killed nine sled dogs outside the community.

Fortunately, he added, a bear has never harmed a human in Arviat – and it’s his job to keep it that way.

Ikakhik remembers one night shift, finding a group of seven- and eight-year-olds playing street hockey at about 4:30 am, unaware of a polar bear lurking behind a nearby building.

“I had to send those kids home,” he said. “Those bears hang around until their stomachs are full.”

Ikakhik’s three-year contract with WWF and the hamlet is up at the end of the year, but he — and many others in town — hope to see it extended.

“As long as they want me, I want to keep doing this,” he said. “It’s a good job, a bit scary at times, but I always try to play it safe.”